Presenting a present with presence. Last week we had Infiniti’s take on a Vision Gran Turismo concept. These Vision GT concepts are pretty much an excuse for designers to let their hair down thanks to the Gran Turismo 6 video game. Now we have this stunning thing from Mazda, called the LM55 Vision GT. It’s been a while since Mazda has been competitive in terms of “dream machines” but it’s good to see them back with a vengeance. It’s almost enough to make you forget that other one-off Mazda hypercars concept of recent years – the epic Fueai.

The LM55’s name should give a hint at where this car draws inspiration from; Mazda’s Le Mans winning 787B from 1991. 23 years on and the LM55 is as good a modern take on the legendary rotary-engined Le Mans racer as any. With a splash of Mazda’s current Kodo design language here and Star Wars level of geekiness there, the LM55 is undoubtedly a jaw-dropping sight. Obviously as its only a concept for a video game and will never make it into the ‘real world’, faces and figures aren’t known. Mazda says it has “advanced drivetrain technology”, which could mean hybrid or hydrogen fuel cells.. Given Mazda’s reluctance on hybrids the latter seems most likely. It’ll have a carbon fibre body though. Which isn’t very sci-fi. You’d expect it to be made out of Kryptonite or something. At least the name of the colour is appropriately upwards thinking – Atmospheric White thank you very much.

Anyway, for now let’s not dwell too much on what’s real and not real but revel at the glory of this fantastic creation. The best thing is unlike most hypercars this one won’t cost you an arm and a leg to buy. It’s a free download for Gran Turismo 6 players because it’s the season of giving. Happy holidays indeed. 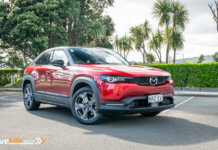