Kia New Zealand says the low-priced Stonic adds a uniquely Kia twist to the fast-growing SUV market, creating a distinctive look to the multi-award-winning styling that is evident in every vehicle designed by Kia.

“Kia has a proud record of designing vehicles that stand out from the crowd and the new Stonic is a great example of a small SUV that is already capturing buyer attention,” says Todd McDonald, Managing Director of Kia Motors New Zealand.

“We have been pleasantly surprised at the extent of the interest shown by the public in the new Stonic ahead of its arrival and we look forward to introducing more New Zealanders to this extraordinary vehicle.”

Starting at $22,990+ORC, the new Kia Stonic has gone on sale offering five models, starting with the LX, EX and Limited, powered by a 1.4-litre naturally aspirated petrol engine matched to a smooth 6-speed automatic. Heading the range are the GT Line and GT Line+ that bring sparkling performance to the Stonic through a sporty 1-litre turbocharged petrol engine, which puts its power to the ground through a 7-speed dual clutch transmission.

Both engines have been upgraded in the 2021 Kia Stonic, featuring Continuously Variable Valve Duration (CVVD) technology to make the most of their power and torque to switch seamlessly between different combustion cycles according to load, thereby maximising efficiency in all driving situations.

The new Stonic also benefits from fine tuning of the suspension and steering systems especially for our part of the world through the ANZAC development programme with Australia.

Based on the same platform as the Kia Rio, the new Stonic is 70mm taller and 35mm wider than its hatchback stablemate, along with 42mm higher ground clearance. The rear overhang is extended by 70mm to maximise passenger and luggage space, which adds to Stonic’s appearance of SUV robustness. The increased dimensions combine to make it one of the roomiest SUVs in its class, says Kia.

Inside, the Kia Stonic include an 8-inch multimedia touchscreen fitted to all Stonic variants, with satellite navigation available on the EX, Limited and GT Line+ models. The GT Line and GT Line+ models stand out with sporty fitments, such as a D-shaped steering wheel, carbon fibre-style dashboard trim and aluminium brake and accelerator pedals.

Stonic benefits from a range of safety features developed by Kia under its Advanced Driver Assistance Systems (ADAS) programme, with many of them standard across the range. That includes the Forward Collision Avoidance Assist (FCA) system, which recognises pedestrians and cyclists, as well as cars. Smart Cruise Control (SCC) is standard from the EX model up, and every Stonic comes with a rearview camera displaying dynamic guidelines.

The new Kia Stonic is designed to stand out on the road with a choice of nine refreshingly bold and lively colours, including a $500 two-tone black roof option. LED daytime running lights are fitted to every Stonic, while top models also get LED fog lights and LED headlights for additional driving safety. 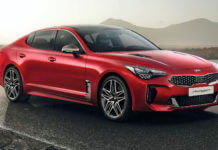 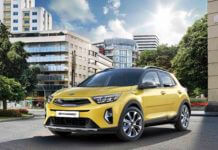 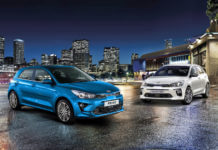