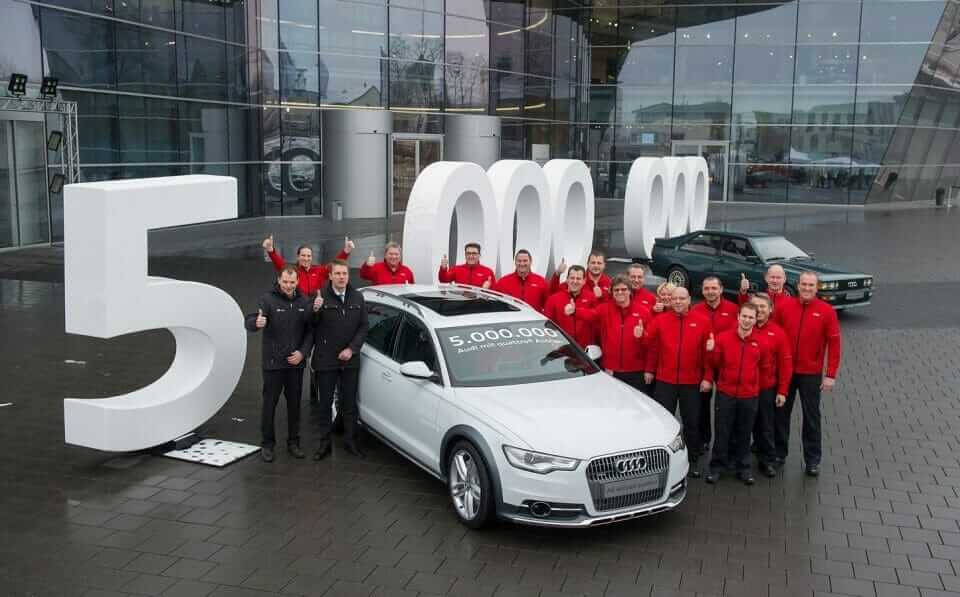 AUDI AG celebrates a very special event today – the five millionth Audi with a quattro drive system. The car is a white Audi A6 allroad 3.0 TDI; it rolled off the assembly line at the Neckarsulm plant. The record is a testament to the leading role played by the pioneering all-wheel drive – no other premium brand in the world can claim such high sales figures for a four-wheel drive or a comparable range of models boasting more than 140 quattro variants.

quattro technology debuted in 1980 in the legendary, original quattro car. Adding together all of the available body types, engines and drive systems amounts to more than 140 different models. Audi offers the widest range of cars by far with all-wheel drive: the Audi Q7, R8, A4 allroad, A6 allroad as well as all S and RS models are available exclusively with quattro drives; Audi offers it as an option in all other model lines.

“quattro is one of the key pillars of our brand and has been a critical factor in our successful history,” said Rupert Stadler, Chairman of the Board of Management of AUDI AG. “The quattro permanent all-wheel drive makes it possible to directly experience our ‘Vorsprung durch Technik.’ We are committed to our pioneering role and will continue to develop this advantage with new technologies.”

quattro is more than a technology – it is an icon. The name represents driving safety and sportiness, technical competence and a dynamic attitude that doesn’t let even adverse road conditions hold it back. The success of the quattro models on the road and in motorsport have contributed, as did a legendary series of TV commercials – beginning with the ski jump in Kaipola, Finnland, which the Audi 100 CS quattro climbed in 1986 on its own power.

“quattro” means “Audi,” and “Audi” often means “quattro”: in 2012 more than 43 percent of Audi customers selected a quattro model – a new record. The Audi Q5 tops the list with about 205,600 units. But it’s not just SUV drivers who rely on the all-wheel drive from the carmaker with the four rings: nearly one in four customers for the other model lines selected a quattro drive in 2012. The quattro models sell particularly well in the United States, Canada, Russia and in the markets of the Middle East. Statistics for 2012 show around 99,800 new registrations for all-wheel drive Audi models in Germany as well – considerably more than the company’s competitors.

The quattro is especially important for the Neckarsulm site, where the record-setting car rolled off of the assembly line: more than one of every two cars Audi produces there features all-wheel drive.

The special Audi character takes on an exclusive form in the models offered by quattro GmbH, a subsidiary of AUDI AG responsible for developing and building Audi’s high-performance RS and R8 models. The customer can have his car customized by the company and order special accessories. Demand for this is increasing:the 800 employees of quattro GmbH represent dynamic growth over the company’s 30 years of existence.

Audi quattro – the technology
Aside from its model range, Audi offers a very wide variety of car concepts – and quattro technology is equally wide-ranging. There is a custom-designed solution available for each concept.

For the compact A3, Q3 and TT models with transverse-mounted engine, Audi uses a quattro line featuring an electronically controlled multi-plate clutch with hydraulic actuator. It is mounted on the rear axle to ensure the best possible distribution of weight. Under normal conditions, the clutch sends power almost exclusively to the front wheels; if wheel slippage occurs there, it can direct up to 100 percent of the torque to the rear. The new A3 features the latest upgrade of the multi-plate clutch.

The self-locking center differential, which is used in most Audi models with an engine positioned longitudinally along the car’s centerline, is a purely mechanical planetary gear set that diverts torque instantly. Normally it distributes 40 percent of the engine torque to the front axle and 60 percent to the rear; if needed, it can direct the majority of power to the axle with better traction. Torque vectoring perfects the action of the differential at maximum cornering speeds with subtle, selective and pulsing application of the brakes. The Q7 SUV uses a special form of the classic quattro center differential that is integrated into a transfer case.

The R8 mid-engine sports car also follows its own path with the quattro drive system. It features viscous coupling that can divert 15 to 30 percent of torque to the front wheels when conditions call for it. Located on the front axle, the coupling is powered through a cardan shaft that runs to the front from the transmission through the engine’s crankcase.

Audi quattro – the history
With the quattro drive, Audi became a pioneer in all-wheel drive systems for passenger cars. The origins can be traced back to the winter of 1976-77, when a group of Audi engineers conducted test drives in the deep snow in Sweden. An Iltis traveled along for comparison purposes – despite its mere 55 kW (75 hp), the leggy all-terrain vehicle easily outdid the much more powerful Audi prototypes with their front-wheel drive systems. A few weeks later a small team of engineers led by Dr. Ferdinand Piëch, then the Audi Board Member for Technical Development, began developing an all-wheel car.

Audi’s stroke of genius, which made quattro technology possible in the first place, was the hollow shaft – a drilled-out secondary shaft in the transmission through which power flowed in two directions. It drives the center differential from its rearmost end. The other half of drive torque was transferred to the front axle’s differential along an output shaft rotating inside the hollow secondary shaft. The hollow shaft permitted all-wheel drive that was virtually tension-free, light, compact and efficient, and that operates without the need for a heavy transfer case or second cardan shaft. The quattro principle is especially suitable for sporty cars, which Audi produces at high volumes.

The revolutionary technology celebrated a dazzling debut at the 1980 International Geneva Motor Show in the new Audi quattro, a coupé with a boxy shape and 147 kW (200 hp). Originally planned for only low-volume production, high demand led to success for the original quattro model; repeatedly upgraded, it remained in the model lineup until 1991. In 1984 Audi added the compact Sport quattro with 225 kW (306 hp) and a short wheelbase.

In 1986 Audi replaced the manual-locking center differential of the first generation with the Torsen differential (Torsen = torque sensing). This worm gear transmission was capable of variable distribution of drive torque. The next big step came in 2005 with the planetary drive that offered asymmetrical, dynamic distribution of the power.

In parallel, Audi further expanded its line of quattro models. The company decided back in the 1980s to offer the quattro drive system in every model line; the new models were important milestones on Audi’s path to the premium segment in the market. The first TDI with permanent all-wheel drive appeared in 1993; four years later the technology moved into the compact segment.

Audi quattro – the motorsport
In early 1981 Audi blew like a hurricane into the world championship scene with the quattro. Hannu Mikkola of Finland won the first six special trials in the snow at the Monte Carlo Rally. With a lead of almost six minutes, he lost his chance at victory when me made contact with a small wall. As early as 1982, the quattro was virtually unbeatable anywhere in the world; Audi redefined the benchmark with seven victories and captured the Manufacturers’ Trophy. The following year Mikkola took home the drivers’ title.

The 1984 season also started off with a bang – the newly recruited two-time world champion Walter Röhrl won the Monte Carlo Rally ahead of his team colleagues Stig Blomqvist (Sweden) and Hannu Mikkola. At the end of the season, Audi took the world championship title for the first time and Blomqvist won the drivers’ title.

The final car was the Sport quattro S1. It celebrated its greatest triumph in 1987: Walter Röhrl stormed up the 156 curves of Pikes Peak in Colorado, USA, in absolute record time with 440 kW (about 600 hp).

In the following years, Audi shifted to racing touring cars. Starting in 1988 the brand raced in the TransAm series and won the title right off the bat. In 1990 Audi switched over to the Deutsche Tourenwagen Meisterschaft (German Touring Car Championship, or DTM), and Hans Stuck also took the title here in the first year with the large and powerful V9 quattro. In 1996 the A4 quattro Supertouring, with its two-liter, four-cylinder engine, entered seven national championships on three continents – and won them all.