Those new to this series of articles won’t be aware that my wife and I are heading to the US in July to buy a classic American car, and road trip it across the south of the USA to Atlanta, Georgia. You can read my initial article here.

The first article called for nominations of just what car I could be looking a for around US$10Kish, that has four seats and a V8. Well, not too much came of that – that Shy Kiwi Syndrome? There was a call for a ‘67 Impala, but I’m not a real fan of those, so I’ve soldiered on with what I think I would like to be driving.

My to current choices are below, but I’m happy to entertain other ideas. In no particular order:

Why the T-Bird? I think that have the classic lines of cars in the US in the ‘60s and that nice 390 V8 (or even better, the optional 428) is going to make for some relaxing cruising on our 8,000km, 5-week trip. Sequential tailights? How cool are those! I used to like the 68-onwards model Thunderbirds too – the ones with the suicide doors – but lately the front of it with those sticky-outy bits just put me off. A shame as I love the rest of the car, but not sure I could like with that look at the front.

Parts are plentiful and cheap, but my concern is that the Thunderbird is monocoque so I’d have to be very careful that any Thunderbird I bought was super straight underneath.

I simply love the styling of any of the Rivieras from these years, but I’m especially drawn to the third generation models of ‘71-73. Why? As a 13 year-old, I got to ride in a gold one in Auckland, and I never forgot it. It was my first experience of an American car. Massive, luxurious, imposing:  I thought I was a king that day, even in the passenger’s seat. That boat tail design is unique – stunning, to me anyway. It turns out the gold Buick was owned by a brothel owner at the time, but being such a sweet, naive kid, I wouldn’t have even known what a brothel was at that age.

So the Riviera bug has stuck with me all these years. Could it be the one…?

I do like the look of the ‘65 model too, with its clamshell hideaway headlights, but still, the boat tail calls me – if I can find a good one at the time we get to the USA of course. While parts are not as easy to come by as the Thunderbird, there are still plenty of retailers in the USA selling whatever part you want for a Riviera. The full chassis is attractive though, from a compliance point of view.

Four words: Smokey and the Bandit. Again I was a teenager and man, did I love that movie. Still do! Is that a good reason to buy a car? I don’t know the answer to that, but I do know I still like the look of the Firebird, preferably in black. The big eagle on the bonnet I could do without, but it’s still a nice package. Concerns about the Firebird? It’s just a bit plasticky inside, and the “Radial Tuned Suspension” badge on the dash yells out 80s’ Holden to me. Not that that’s a bad thing! Many of them have a black interior, which in July is going to be as hot as.

The Firebirds of these years are plentiful and still sort of cheap, with stunning, low mileage examples around the $15K mark – some less, and some much more.

While the shape of these years of Torino don’t appeal to some, they appeal to me. Starsky & Hutch stripes? Nah, I draw the line there. Some of the rarer Torinos are really (and I mean REALLY) getting up there in price, but there are still some nice 351 models going for under US$15K, with reasonable miles on the clock. 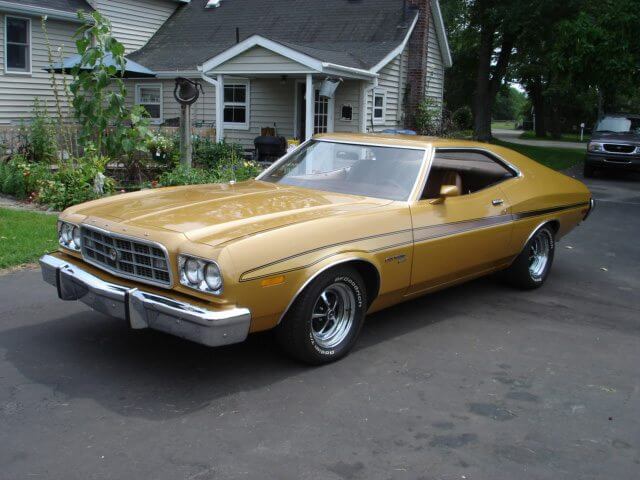 Am I the only one that likes this shape?

There’s just something about the Camaro. Even the 1979-1981 models do something for me. The first brand-new car magazine I ever bought (Car and Driver – a great choice for a budding motoring journalist!) had a bright yellow 1981 model on the cover. I was smitten with the Camaro, Car and Driver and cars in general. There are almost as many Camaros for sale in the US as Mustangs. Well, that’s a lie. There are ten times more Mustangs than any other classic car for sale. But Camaros are still commonly seen for sale.

Camaro parts are so cheap in the US and there are a multitude of companies supplying parts for them. Prices too aren’t too bad either.

Problems with the Camaro? I’m not sold on the looks of it, and they are still a fairly basic sort of a car. When we are talking 8,000ks across the US in July, and then the same again next year over Route 66 from Chicago, well a bit of luxury would go down pretty well.

I am still totally open to suggestions around what classic American car to buy – please, feel free to add a comment below and give me some more models to look at!

Will the Dream be ruined?

The thing is with any of these cars, it’s still about driving it first. I spoke to one guy who had his heart set on a Corvette…until he drove it. Hated it.

I spoke to a friend the other day who echoed the same thing. His life-long dream car is a Lotus Esprit. He drove it, and no longer wants one. Could he be wrong? I hope so! Ever since watching The Spy Who Loved Me I’ve wanted to drive one!

The second article in this series asked for nominations for a title for a book I am writing, not just around this experience but to show how to go to the USA, find a car and buy it, insure it, road trip it, then ship it back and get compliance.

Through that process of ideas, we’ve decided that the title with be; USA2NZ: Buy It, Drive It, Ship It with a tagline of “A Kiwi’s guide to buying a car or RV in the US and shipping it home”. We think that says it all.

You can read more about this book (release date is October this year) on this web link.