The McLaren 720S is fast. In fact, it’s so fast it managed to get from Geneva to Tokyo in less than 12 hours. Yes, not even a day had passed after its global debut at the 2017 Geneva Motor Show and it was already having its first local unveiling in Tokyo.

That’s what makes McLaren Automotive special, they do things differently to other manufacturers. Think about it; they’re only 6 years old yet they’re pushing boundaries and doing things other manufacturers are only just getting right after decades in business. Launching the second-generation Super Series, the core product line for McLaren, immediately after its global debut shows the sort of fresh and modern thinking behind a fresh and modern company. It’s one of the many things I love and respect about McLaren. They throw the old conventional rulebook out the window and make their own.

It’s also basically what they did with the 720S, the follow up to the 12C/650S line. It’s the first time McLaren had to do a whole new refresh for one of their product lines and rather than go down the traditional evolutionary changes like a certain other brand, they went for revolution instead. It’s the “McLaren way” according to George Biggs, Managing Director of McLaren Automotive for Asia Pacific.

The Super Series started 6 years ago with the MP4-12C (later renamed simply to 12C) and has since evolved into the 650S and 675LT. Some might be surprised at the fast rate McLaren are updating and changing their cars, some might even say they’ve got too many cars that are too similar to each other.

Think about it like this; the 12C and 650S were the same car but the latter being a facelift. The 720S replaces that entire line completely, this is a new-generation car. 6 years might seem short but let’s not forget Ferrari replaced the 458 with the 488 after a mere 5 years. McLaren is simply responding to the competition and in this day and age everything has to be the latest and greatest. Let’s talk about the design later because as this is a supercar it’s the facts and figures that worth talking about first. Powering the 720S is a new 4.0-litre twin-turbo V8, a development on the 3.8-litre unit in its predecessors. Thanks to 41% new part content, the new engine is able to produce 720hp/537kW and 770NM of torque. It also sounds a lot louder than the 650S. To stop the 720S, carbon ceramic brakes are fitted as standard. 390mm disks up front and 380mm at the rear. They’re actually smaller than the 650S’ to save weight but these are still enough to stop the 720S from 200 km/h to nought in 4.6 seconds, or 117m. Handy if you happen to find yourself launching from standstill to 200 near a policeman.

Amazingly, the claimed average fuel consumption for the 720S is a somewhat reasonable 10.7L/100km. Now I’m not entirely sure how many owners will be able to keep a light right foot behind the wheel of this car (it’s got a controlled drift function for crying out loud!) but it’s good to know it is potentially more economical than a Mercedes-Maybach. The reason for the blistering performance and relatively good fuel consumption is the low weight. Dry, it weighs around 1283kg. With fluids and 90% fuel it’s still at 1419kg. As with every McLaren road car since the legendary F1, the 720S has a carbon fibre chassis tub. The Monocage II is 18kgs lighter than the 650S’ but is rigid enough to have thin a-pillars and a glass c-pillar.

Aluminum is used for the spaceframe for the front and rear suspension. The double wishbone suspension all round has been redesign to save 16kgs. The new talking point is Proactive Chassis Control II (PCCII) which was developed with the University of Cambridge after a six-year process. Essentially, 12 sensors and accelerometers can assess the driving situation and adjust the suspension according every five milliseconds. Clever stuff. Inside, it’s a continuation of the simple and minimalist ethos of other McLarens. There’s a driver-focused design, particularly with the instrument display. The TFT display has two display modes. For normal driving you have the full screen up displaying a whole raft of information. For more spirited driving, the screen can be folded away at the touch of a button to give the driver more open view out front while displaying only the essential stats.

Overall fit and finish is fantastic, so much more than you’d except for a relatively small company. There’s also a nice airy feel inside thanks to the generous use of glass. The large windscreen, glass panels on the roof, and glass c-pillars gave it a real cockpit feel. Getting in and out was relatively easy too. 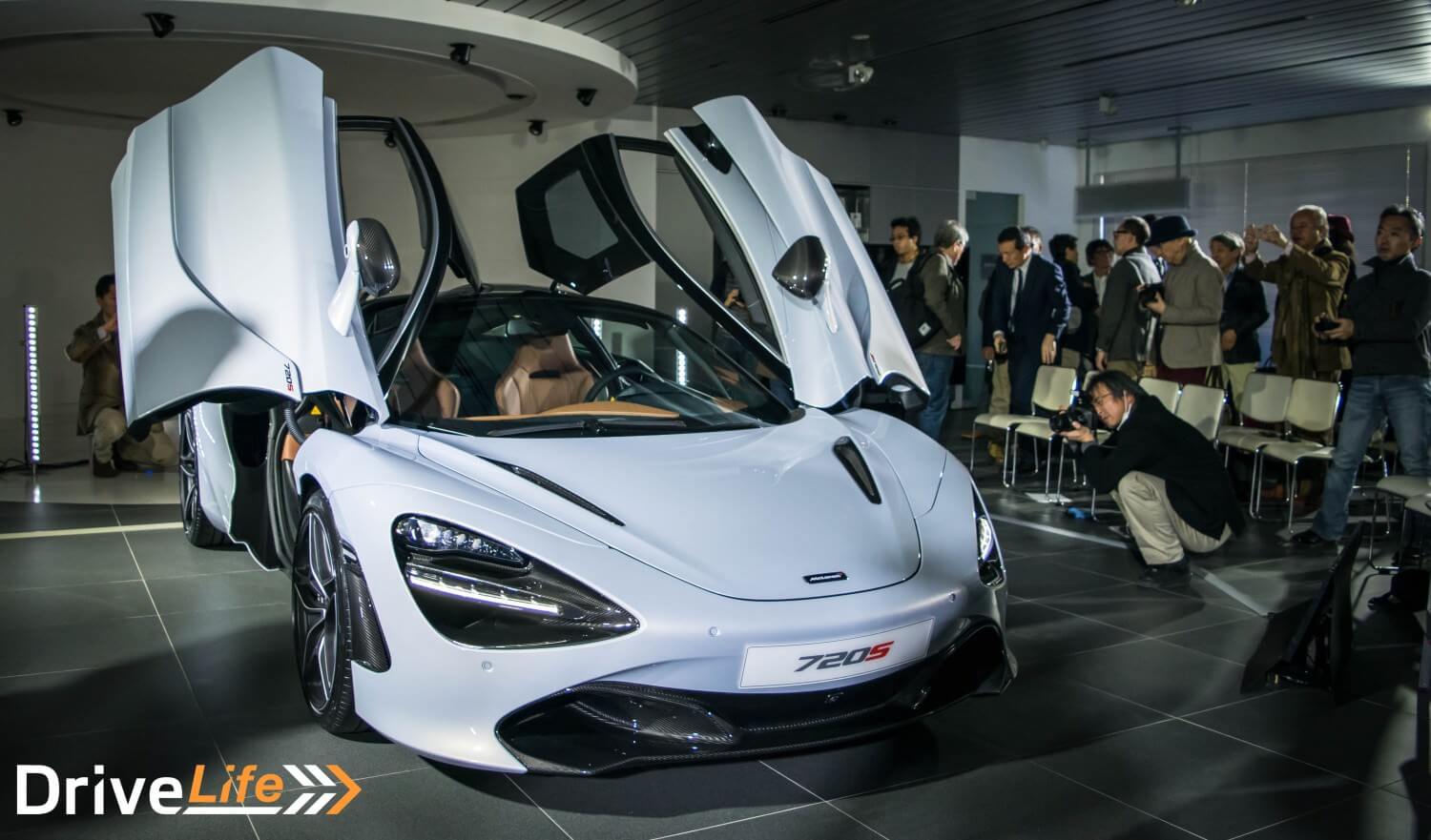 Now, the design. This is perhaps the most evident of McLaren’s ‘revolution than evolution’ theory. It looks amazing, almost alien like with that front. Some aren’t sure on the design but reserve judgment until you it in person. It’s a design that needs to be seen to be appreciated, part of the reason I guess McLaren decided to show us this car so soon. It was also clever on McLaren’s part to show this car on its own without the distractions of other cars at other booths you’d get at a big motor show.

The design of the 720S will grow on you over time and as you look closely at the details you’ll realise whenever McLaren does something it’s for a reason. The odd headlight clusters are like that because there’s a duct there to cool the air conditioner and oil, as well as the matrix lights.

You’ll notice there aren’t any visible air vents on the side. That’s because they’re ‘tucked away’ in the double skin of the body. Up top is a channel that runs past the McLaren F1-style doors to cool the engine. Down the bottom is a blade that assists in drag and downforce. The large rear wing, which also functions as an airbrake, has 30% more downforce than before and greater aero efficiency. There’s a some P1-inspiration in the way the new rear wing looks.

Overall, the 720S has the ‘wow factor’ and presence needed for a car in this segment, and some. There’s more impact than when the MP4-12C first came out. In many ways it reminds me of the ‘boutique’ supercars than mainstream one. In fact, it makes many of its rivals look dated. The teardrop shape of the roof and the clean surfaces give it a sort of Pagani Huayra look. To me, that’s about as pretty as supercars get.