Being a tall and a generously sized guy, I would not usually be first in line to do a review for a Mini. I can barely even get into an original Mini, and if I did, I would resemble the guy from the Simpsons with the tiny car and his knees up around his head.

Since BMW took ownership of Mini, they have become bigger and safer. Safer being the main word here, as anyone who has been in an original Mini will know that your clothes will give you more crash protection than the body of those small Minis. 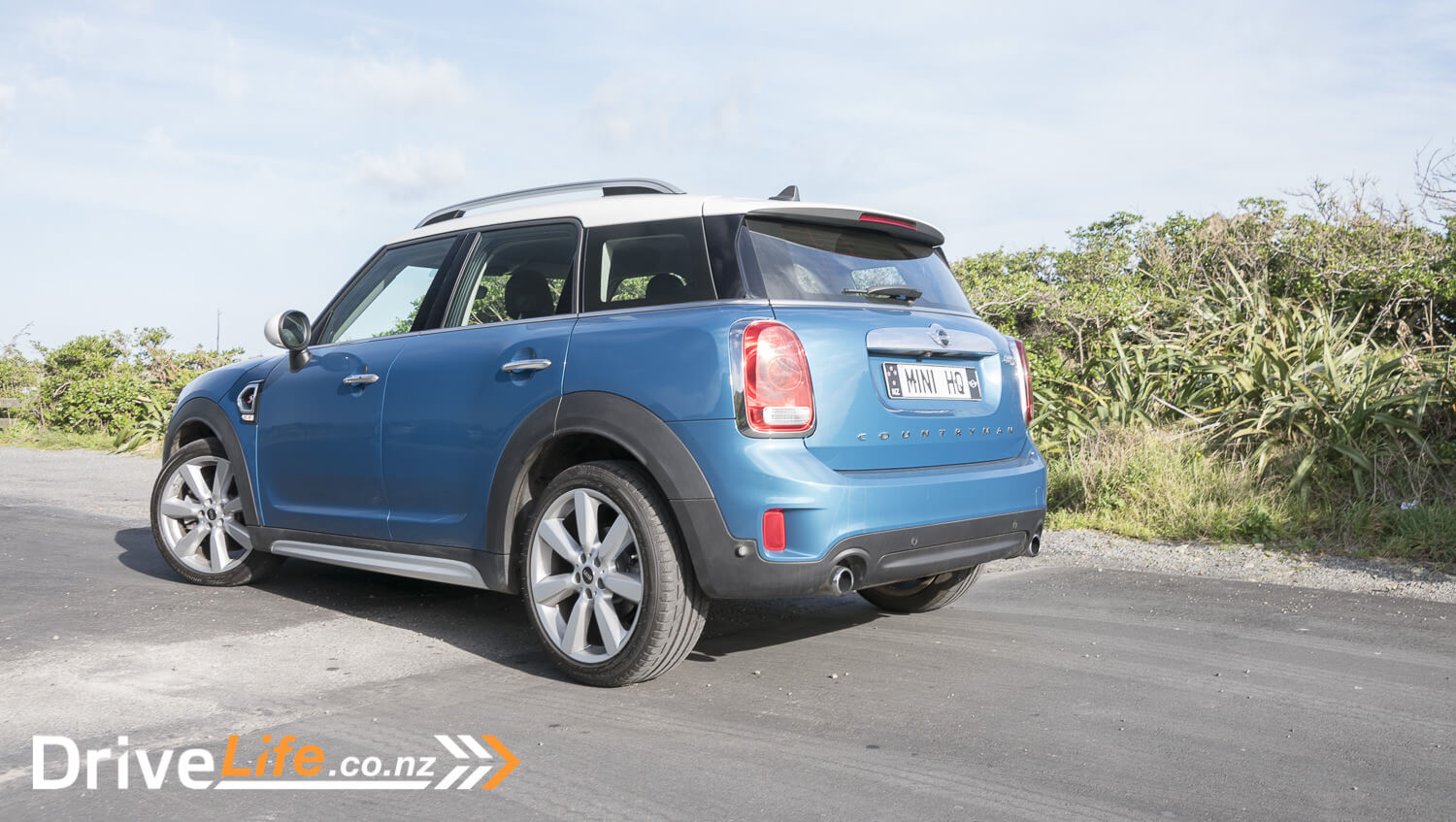 For the international market, the 3 models available in New Zealand also come in diesel variants. They are not listed on the official Mini New Zealand website, but when I asked about them, Mini New Zealand responded with, “Traditionally, customer demand in MINI product has favoured petrol variants over diesel.  Across the market, in general, we are seeing a shift towards petrol, especially in passenger vehicles.  However, if a customer particularly wanted a MINI diesel, then we would certainly look at ways to support this.” Where is this Mini, is it parked somewhere behind this massive blue car? Oh wait, this is a Mini…… and this Mini Countryman is not mini. And I was not the first or last person to gasp at its size, during the week I drove it.

Even though it was huge and a bit strange at first, I grew to like it quickly. I loved the paint scheme, in Island Blue, with a white topped roof and two white bonnet racing stripes. Being a bit of a movie buff, this was already screaming Italian Job to me. I imagine this Mini could hold a decent stash of gold, but would it be the getaway car that we all know and love? 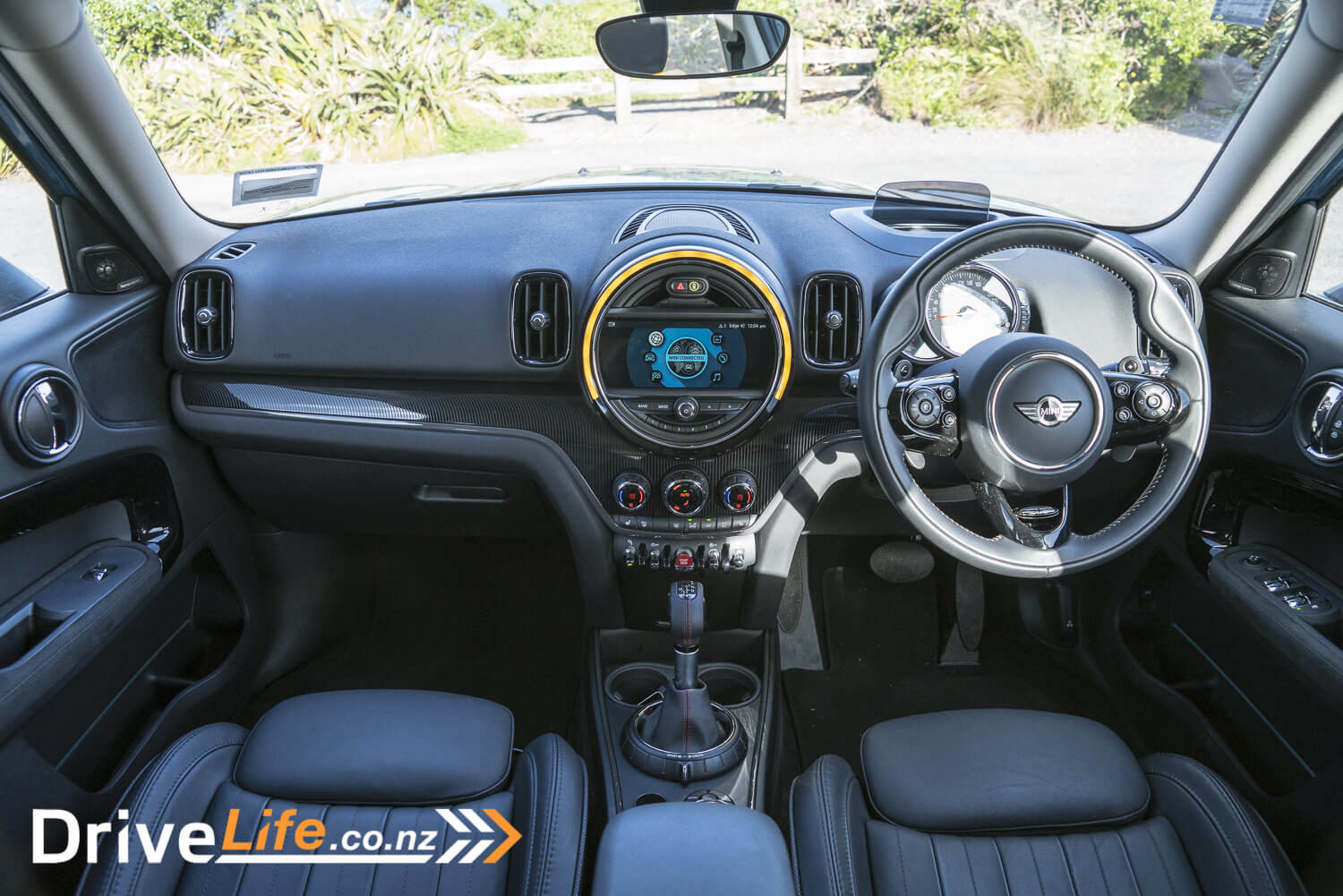 The inside of any of the new Minis is where you make your final decision. It’s very much a love or hates thing. Thankfully for Mini, they hit the nail on the head 9 times out of 10, and almost everyone who got in loved the different approach to things compared to the typical interior. The small driver dials, large central media screen, and toggle switches for even the most boring of features. It was an exciting place to get into, exploring all the different features and design tweaks around the cabin. The overall interior was built very well, everything felt nice and solid to the touch, all but the plastic ring around the gearstick, that let you change drive modes. It was the only thing that felt a little flimsy.

The first thing I need to do is congratulate whoever in the Mini design team that made the call on the engine start/stop button. This is for several reasons; one and this is a major one, it’s red. This may seem like such a simple thing to do, and it is, but so many cars fail to get this right. If it’s sporty, make it red, as it makes it a bit special.

Second to that is a toggle switch, mounted in the centre of the centre console. Mini see that this simple button or toggle should not be overlooked or hidden away somewhere. Mini have embraced and celebrated it, and that’s cool. Well done Mini. 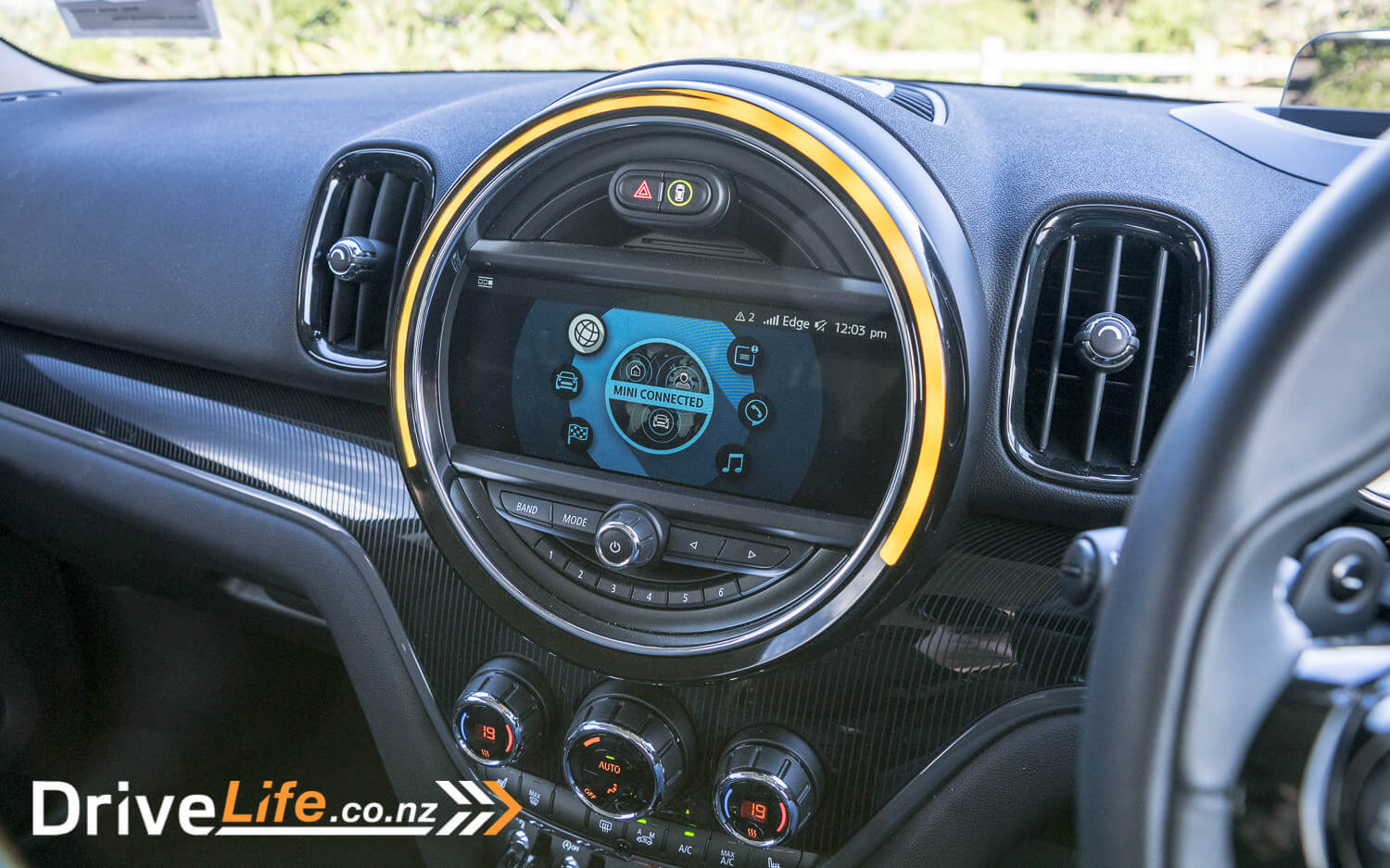 The centre console is by far the main feature in the cabin. It features a large widescreen display with brilliant clarity. Below this is the typical controls for the radio and preset station, and above the screen, you have your hazards and vehicle safety feature button. And all of this is surrounded by a LED ring, that changes colour depending on what media mode you’re in, or how you’re driving. It’s a funky and unique system, that outshines many others. It’s simple, fresh and super easy to use with the multi-directional and twists control dial near the gearstick. Via the media display screen, you can access the navigation map, your phone via Bluetooth, media devices or radio and driver mode additional displays. There was one screen for sports mode, and one for green, which I will talk about later.

The dials behind the small sporty steering wheel, which I loved, by the way, were small and simple. It consisted of one dial for speed and some additional info, one-half dial, for RPM, and a digital gauge for fuel. The fuel gauge beeped each time it went down one level. I had mixed feelings on the dials, as they were small. But as this car was optioned with the HUD display, it did not bother me that much. 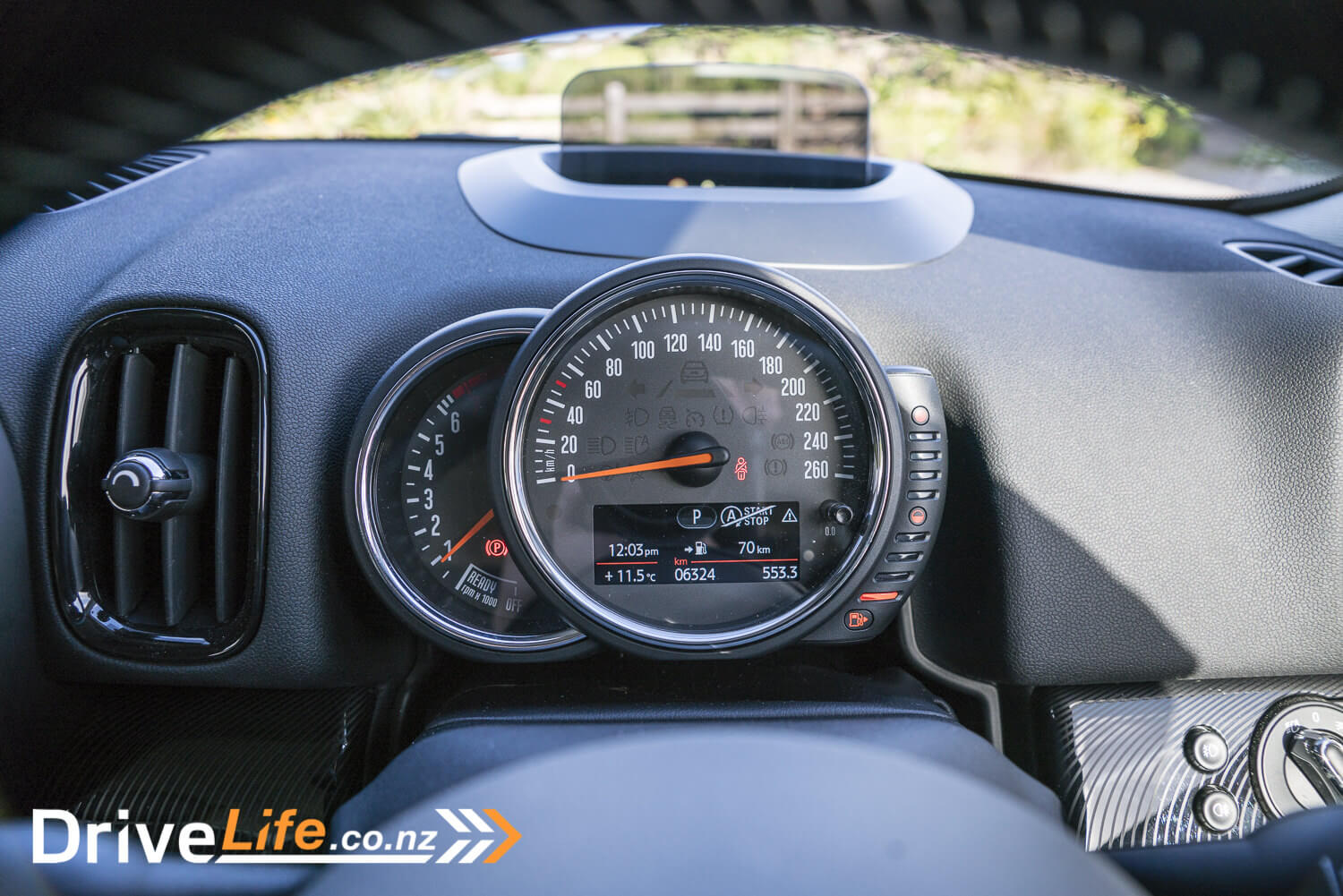 The seats were very comfortable, I did not find it hard to get comfy or find my ideal driving position. The driver’s seat had very good side support, and an even seat extending leg supports for those taller drivers. As you moved around the cabin you noticed a lot of different easter eggs, hidden in the details. Like the British flag that was subtly stitched into the back of the headrests. One could also be found at the bottom of the steering wheel. This is good to see, as it shows they are not letting it become another German-owned company, forgetting about its past.

Being a Massive Mini, the boot space did not disappoint. It has a 450-litre boot with the rear seats up – one of the biggest in its class. With the back seats down, this grows to 1390 litres. Both figures well within the standard capacity for a vehicle of this size. This Mini has not lost what’s true to Mini, or its soul from becoming a much larger vehicle. You only have to drive the Mini down the road to know this. Even though it’s big – huge even – once in and behind the wheel, it feels small and nimble. Everyone has heard the line – driving a Mini is like driving a go-kart. And even though this Mini is about the size of 10 go-karts, it had not lost that feeling.

Powered by a Mini Twinpower Turbo 4-cylinder petrol engine, producing 141kW power and 280Nm torque, this engine never felt too small for this big Mini, thanks to the lovely 8-speed automatic gearbox. There are 3 driving modes; normal, green and sport. In normal everything was set to its default setting, which to me still felt a bit sporty and fun to drive. This was great news to me, if the normal setting is a good experience, sport should be great.

Let’s start with the Green mode. With a flick of the switch that’s around the base of the gear stick, the vehicle is in Green mode. This mode is there not as a way to force you to drive more efficiently by limiting power or throttle response –  it takes a different approach, a bit more of a mental tactic, which is paired up with the Minimalism Analyser. This is a display that has two-star ratings; One for anticipation and one for acceleration, and you are rated on how well or badly you drive. And based on how well or badly you do, there is a graphic of a cartoon fish in a bowl that gets happy or sad. Bob, as I came to know him, can be rewarding and annoying, as you try to improve the efficiency of your driving. The car itself does not feel very different from normal mode. The throttle has been reduced a bit, but not as much as most cars in a similar mode. Personally, I liked this approach, so I could drive as required, not forced to drive how the manufacturer wants me to. There was another cool addition to the automatic start/stop engine, on top of its ability to shut down and start up very quickly. The LED ring around the dash powered down each time this happened. And when the engine came back on, it powered back up from the bottom to the top, illuminating the complete ring again. Nothing life-changing, but it’s different and I liked it. 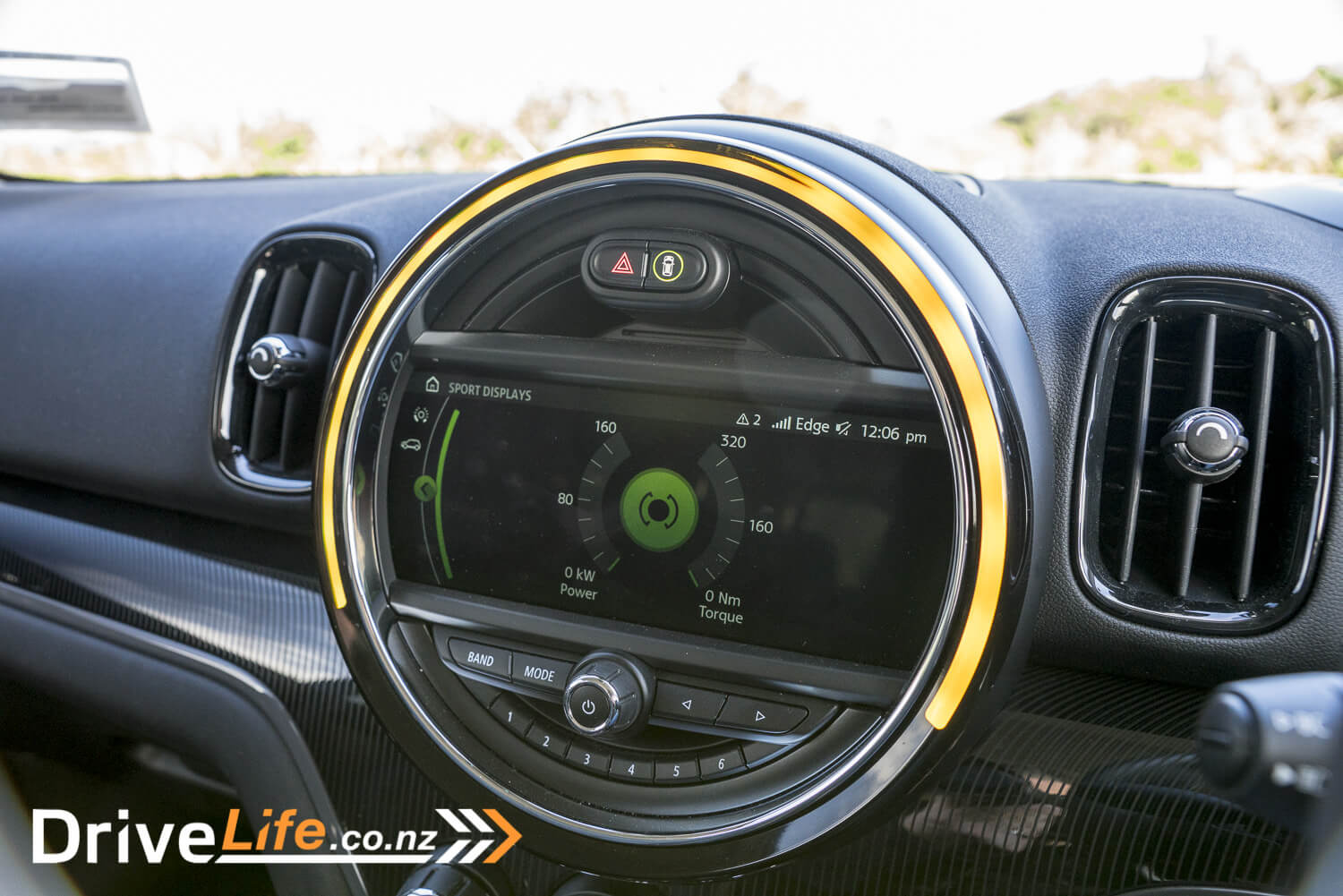 The sports mode seemed to have some power over me. Every time I switched it on, which was often, I felt this cheeky grin appear at the corner of my face. There is something about the Mini that makes you feel quick and confident about your driving. Once in sports mode, this is where the Cooper S Countryman really came alive. Power was instant, and when you asked, you were propelled forward with the sound of the engine growling into life. And when you eased off or downshifted, you were rewarded with a subtle turbo discharge. This car is a lot of fun to drive, and that is what Mini is all about, driver experience and fun.

It’s not mind-blowingly fast, or something that can spin out rear tyres at 100km/h, that’s not what Mini is about. As I zipped through the city, it would not have been hard to convince myself that I was in a scene from the Italian Job, maybe the Wellington edition. It was hard to believe the that Mini Cooper S Countryman did a 0-100km time in 7.2 seconds – it felt so much faster than that. But that’s its charm in an odd way, you’re able to have heaps of fun and driver experience well within the speed limits. Additionally, while you were in sports mode, you could access the sports menu on the media display screen. This then showed you a digital version of a kilowatt and torque gauge in real time. 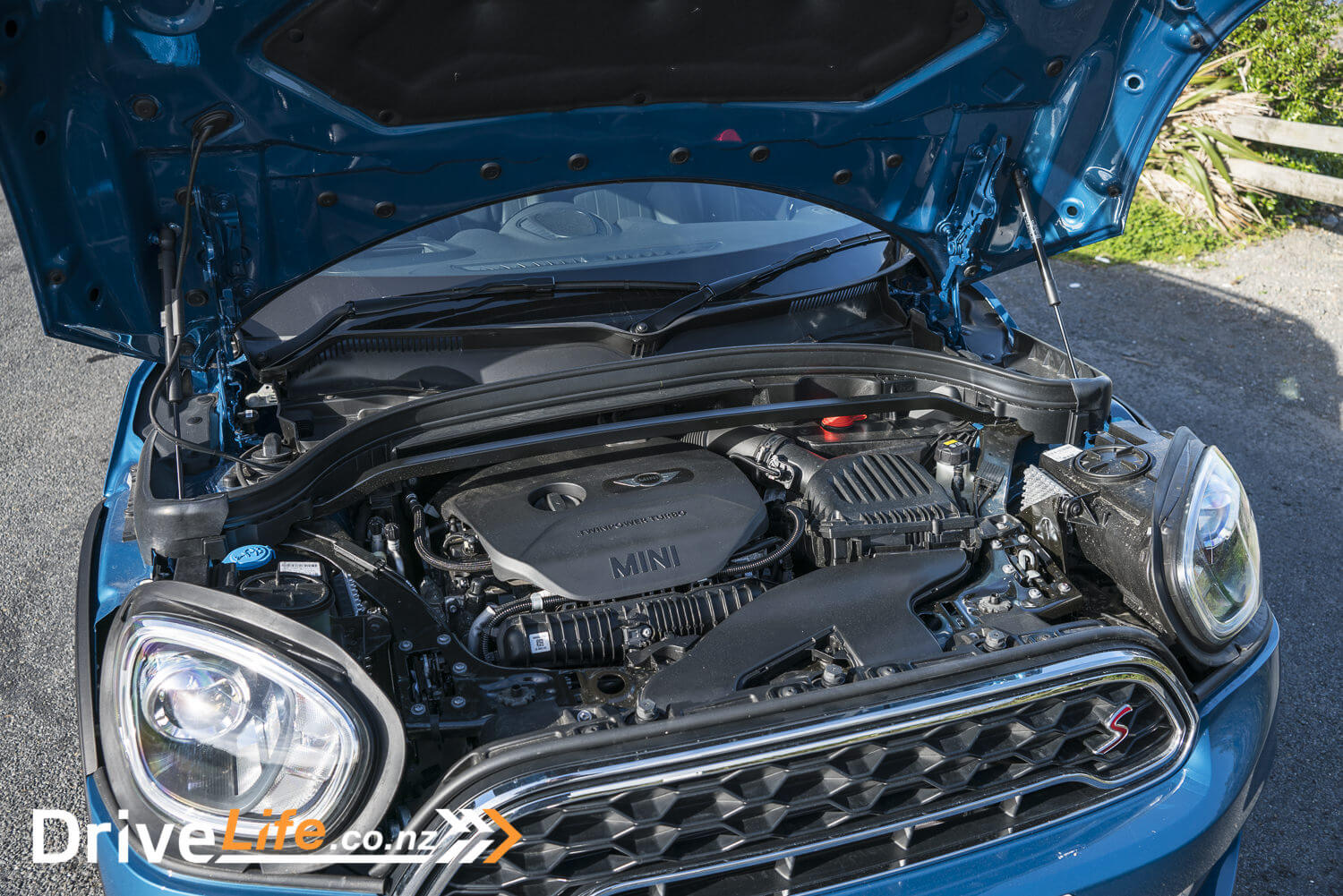 One thing that surprised me was that I did not use the paddles that much. I like paddles on the steering wheel, but only in the right car. And this Mini was not that car, but what I did find is that I used the gear stick to manually go up and down a gear instead. Maybe it’s more to do with the feel of driving a Mini, and having a manual one might have been a bit more fun too.

Even though I spent most of my time in normal or sports mode. After a week of driving, I still had about a third of a tank left, which was a first for me. I normally cover around 400-600 km a week, and with most of the review cars, I either get back just in time or run out of fuel. So this was another tick in the Mini’s cap. This might be thanks to those 8 gears, as on the motorway the rpm were always very low while cruising along at 100km/h. 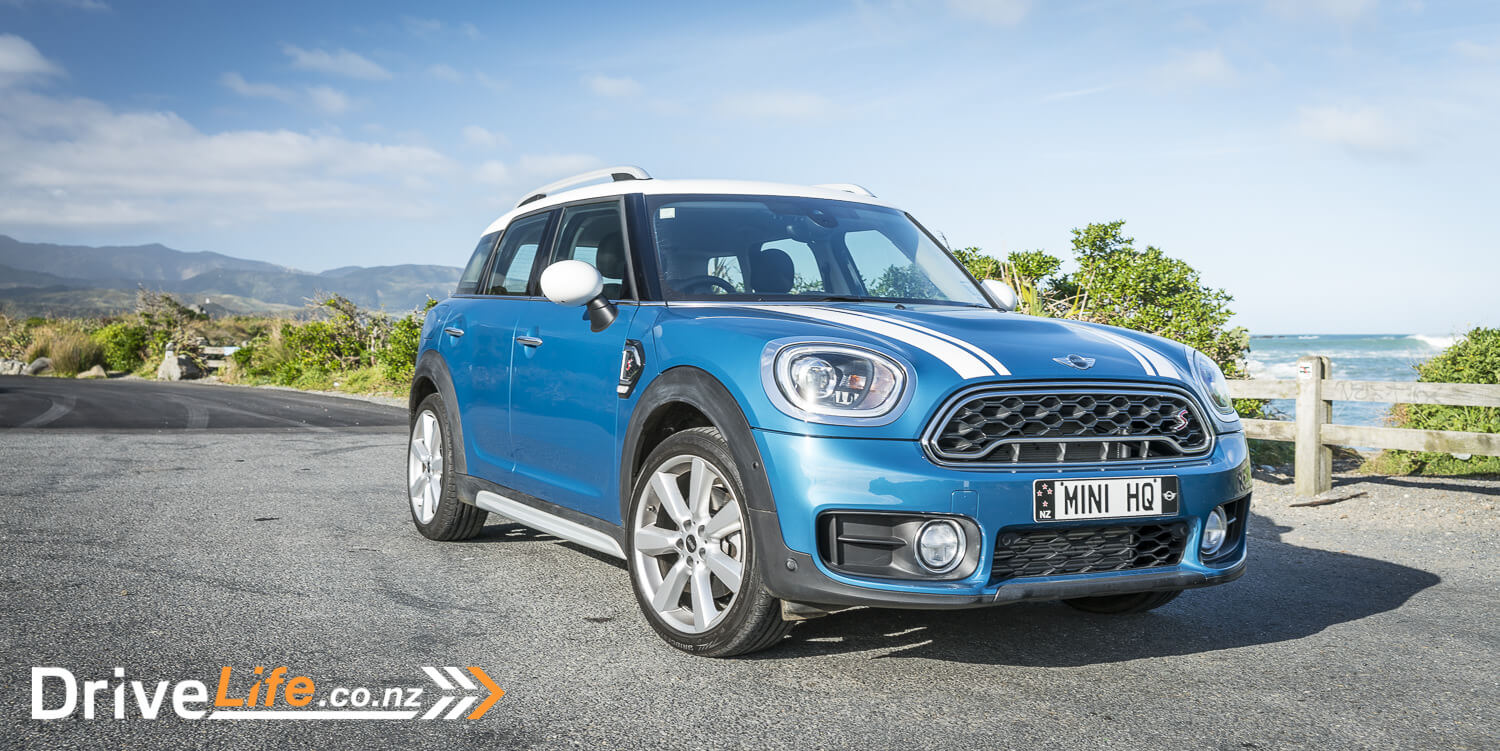 As it’s a crossover of sorts, it’s a bit of a mixed market with a range of products that cover a wide price range. Some of the decisions may be based on how you live and what you need the vehicle for, other might just be purely based on looks.

The Mini Cooper S Countryman manages to stand out, but is it the best value for money? 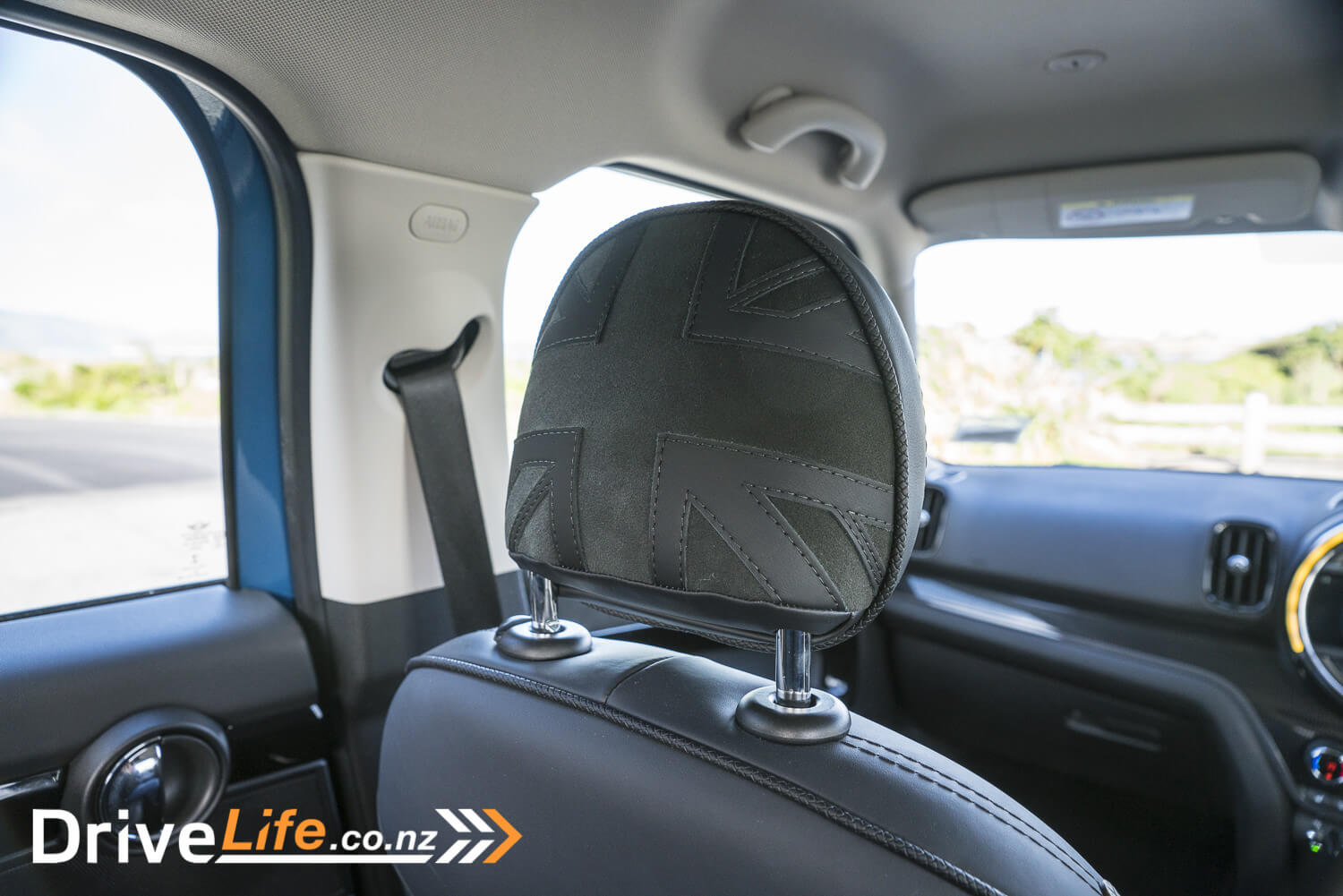 After a spending the previous week in a GLC AMG Merc that was over twice the price, I wondered if I was going to enjoy this car. But I really did, and it left a longer lasting impression on me than the Merc did.

Even though this Mini is not Mini, it’s still got the Mini spirit, deeps in its bones. It’s a car that brings out a bit of your cheeky side, with a great driving experience, and its funky modern styling. Once you got past its size, it was a hard car not to like, and everyone did. It’s not perfect, but If not for the extravagant additional options list, this Mini would have been a 5 chevron review.

If you’re after something fun, exciting, funky and a bit different, the Mini Cooper S Countryman could be right up your alley.