With the mid-size SUV market segment seemingly flooded, it would be hard for any manufacturer to launch an all-new model.

Skoda has had a very good run in New Zealand lately, especially with the Kodiaq SUV receiving the Car of The Year award in 2017.

Can Skoda launch a new mid-size SUV in a market segment that has so much choice?

Skoda New Zealand sent us along to the launch in Auckland in April.

Apparently 72% of Kodiaq buyers are new to Skoda – so that’s buyers who would otherwise look at ‘other’ brands coming to them. They are certainly hoping for a repeat with the Karoq, stealing buyers from other brands like Mazda and Holden. For those targets, for a start there’s just two models in the New Zealand line-up; the Ambition+ and Style. For both models you can add the Plus Pack, which includes Varioflex seating, a leather sport steering wheel, gearshift paddles and steel pedals at a cost of $2500.

Varioflex seating was last seen in the Yeti, and means that the second row of seats folds up or flat and is also sliding. With the second row folded up against the front seats, you get a very reasonable 1605 litres of space. With the Varioflex seat option, it also means you can remove each individual rear seat, and if you take them both out, this means a capacity of 1810 litres. To put that in perspective, the Kodiaq with the second and third row down is just over 2000 litres.

You can also remove just the centre seat and then slide the other two a little closer together, meaning more elbow room on each side for each of those two passengers.

The Varioflex option can be ordered separately for $1750.

Since the Karoq effectively replaces the Yeti, it’s similar in size, but is longer, wider, has a longer wheelbase, has slightly lower ground clearance and has a bigger boot.

Connectivity includes support for Apple CarPlay and Android Auto on all models. There’s also the new Skoda OneApp, which allows the users to connect to the car and view info on driving, fuel cost, fuel efficiency, engine output, engine temperatures as well as other information.

There’s the usual Skoda ‘Simply Clever’ features, like the cargo cover in the boot that is attached to the tailgate, an umbrella under front seat, and the jumbo centre storage box which can be configured in multiple ways.

Engines are a mix of petrol and diesel. There’s the all-new 1.5-litre, four-cylinder turbo petrol motor putting out 110kW of power and an excellent 250Nm of torque. The Karoq is the first car to use this new engine, which is available in both the Ambition+ and Style models.

This new engine has APS, or Air Plasma Spray technology, and also has Active Cylinder Shutoff tech. The combined fuel rating for this 1.5 TSI motor is 5.6l/100km. It also means that the Karoq can get from 0-100km/h in 8.6 seconds, when its competitors are over 10 seconds.

You can option the Style with the 2.0-litre, four-cylinder turbo-diesel motor, which also puts out 110kW but gets 340Nm of torque. This motor is only available with 4WD.

Both engines are fitted with a 7-speed DSG gearbox.

The Karoq has a 5 Star ANCAP rating – as do all Skoda models in New Zealand.

Enough talk – time to get behind the wheel. My passenger and I grabbed a 1.5-litre Style in Quartz Grey Metallic, and hit the road to Kumeu. I drove first, and can confirm this 1.5 motor is a gem. Quiet, torquey, smooth – very smooth. I prefer a DSG gearbox over a CVT any day of the week, but did notice that normal shunting that occur with DSG gearboxes when you travel at low speeds around town. On the motorway, the Karoq is a pleasure to drive, with good visibility out at all angles. It really does feel like a smaller Kodiaq, and is all the better for that.

There was almost no wind noise, and general NVH seemed excellent. Sometimes that’s hard to achieve in a smaller car.

We switched places at the end of the motorway, and I got a good look around the cabin. Surprisingly, there’s lots more hard plastics than I expected to see, especially on the doors. The whole centre console is a hard plastic. They don’t feel cheap, but there’s very little padding or other materials used.

The TSI we were in didn’t have the $2500 optional panoramic sunroof, but still felt quite light inside, no doubt helped by the beige headlining and pillars.

I had a play around with the new widescreen display, which by the way has amazing clarity. I’m not sure of the resolution but it looks superb. SatNav is standard on the Style models, and the display has changed from other Skodas so you can now select your options from a carousel-type system, or if you prefer switch it back to the ‘old’ grid system.

We had lunch at Huntington Lodge in Waimauku, and then hit the road back to the airport.

This time we drove a 4×4 Style with the diesel engine. Oh I love the torque of this motor. Don’t get me wrong, that 1.5 has plenty but the diesel is dreamy. Punch it out of a bend and it gets up and goes. I managed to get on a few twisty roads, and the AWD system seemed to make the car sit better and handle better too. Still – let’s wait until we get one for a week to test before claiming too much.

This car also had the optional panoramic sunroof with electric blind, and if I was buying a Karoq, it would be hard to pass this option up. It really lets so much more natural light into the cabin.

All too soon, we were at the airport.

No solid answers yet, but initial impressions are good. If it can be as good as the Kodiaq, it will be a contender to watch for. 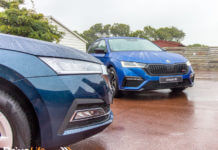 0
The Santa Fe is undoubtedly an icon car for Hyundai. It has a hugely loyal following, and has driving dynamics that are a match...