Toyota’s new Corolla Hatch as been launched with the slogan of “Nothing’s changed, except everything”. Let’s dive into the 2018 Corolla Hatch SX and see if this is true. Having a closer look at the Corolla range. The Corolla does come in hatch, sedan and wagon variants, but we are just going to focus on the hatch otherwise we will be here all day. It does show though how versatile the Corolla really is by coming in so many different sizes. Surely there is one for everyone.

So onto the hatches; even here you have a wide selection to pick from: there are 2 categories, the petrol set have the GX, SX and ZR and the hybrid set have the GX and ZR. Let’s go through them.

Starting with the petrol set, we have the GX at $29,990. The GX is the base model Corolla hatch and comes with the 2-litre 4-cylinder engine which has 125kW of power and 200Nm of torque, 16” silver metallic alloy wheels, triple LED parabola headlights, air conditioning, black fabric seats, 8” colour TFT touchscreen display with 6 speaker radio, Bluetooth, SUNA satellite Navigation and a reversing camera.

Moving onto the SX, which starts at $32,490 and is the middle of the petrol range for the Corolla hatch. It is fairly similar to the GX with some of the differences being the addition of paddle shifters on the now leather steering wheel, accompanied by a leather gear knob. Some of the other features of the SX are auto folding mirrors, push button start, auto dual zone a/c, Qi wireless charger and a smart key.

Now to take a look at the hybrid side of the line up. There are only 2 hybrid models, the GX Hybrid and the ZR Hybrid.

The GX Hybrid at $32,990 is almost identical to the petrol version except for the obvious engine change, now being a 1.8-litre petrol hybrid engine with a total output of 90kW, it also gets the push button start and dual zone A/C.

The ZR Hybrid at $38,490 follows the petrol ZR exactly coming with all of the same features, the only difference being the hybrid engine. My first impressions is of the colour, Volcanic Red. This is a great colour really sticks out and makes the car look great. The colour really highlights the curves and sharp angles that the car has which I feel would be lost in some of the darker colours.

Looking at the car from the rear, I do get reminded of hints of the Mk2 Seat Leon R which also had the vertical slits in the bumper that were made to look like air vents. The Corolla has smaller, less prominent vertical slits in the rear bumper which act as rear reflectors. But the same really rounded rear corners as the Seat.

The other thing I noticed while looking at the back was the rear lip; the rear bumper pushes out about 4-5 inches from where it meets with the boot lid when closed, I felt it was a strange design choice but what would I know about design? ha ha.

Looking around the rest of the car you can see it is a Corolla, you can see the progression of the design over the last few years just getting in more sharp angles and longer curves. Getting inside the SX Hatch it’s a nice clean and simple layout. The cloth seats are good with a somewhat hexagon pattern on the inserts which I liked, almost reminded me of my Golf GTi’s front grille.

Once you are seated you are greeted by the leather steering wheel and large speedo of the instrument cluster, which is a nice touch that does make you feel like you are not in a base model car. To the left of the large centre speed dial is the rev counter and then to the right of it is the 4.2” colour Multi-Information Display.

In the centre you have the 8” touchscreen display for the radio/multimedia system which unfortunately does not support Apple CarPlay or Android Auto. The lack of support for this still baffles me in the Toyota line-up. However they do have support for mobile assistance function for Apple Siri and Google Now, which can aid you in replying to messages hands-free.

Toyota have covered SatNav themselves which, let’s remember not too long ago used to be a luxury but is now available even in their base model GX. I have discussed Toyota’s SatNav before in the Toyota Camry hybrid SX and unsurprisingly being it has only been a month or so since I drove it there is not much difference in the system. It was still not too intuitive to use and it still had areas that were out of date by a fair bit. So I won’t go on about it again but it would be nice to see some updated maps at least. Below the centre console is another great feature to see in cars of this price range, a wireless Qi phone charger. These can be great as it removes the nastiness of messy wires dangling around and enables you to always get a top up of power on the go. The problem however that most Qi car chargers have including this Corolla is that you need the phone to be in a small area for it to charge. Unfortunately as soon as you drive off or go around a corner, not even at any great speed the phone slides out of the charging area and you are no longer getting a charge. It might be better if your phone case had a more grippy surface like a leather case or similar. But I do not, I just have a plastic case and my phone was sliding all over the place.

The only other safety issue I have with how some of the Qi chargers are implemented is that I feel they should have a cover or as some have done but them inside the armrest, so that if you are in an accident the phone does not become a projectile inside the cabin causing more harm.

You do find when you get around to the boot that there is one downside with it. The boot is smaller than average. The main reason for this is that to accommodate the spare tyre they have had to raise the floor of the boot. So it is smaller but being honest I never found that I was left not having enough space. Granted I did not pick up a bunch of people from the airport or get a couple bags of compost from the garden centre but for most day to day use for me it was fine. I dont have one to test with but I image it might be a tight squeeze for a buggy. Getting on the road the car feels good, the steering is light and easy, which is what you want for a small city car to get you through all the twisty streets back alleys and parking structures.

Speaking of parking this thing is so easy to park; first it’s a hatch so makes it easy for parking anyway and it’s got a good turning circle of 9.4m which made it a breeze getting in and out of some of the tightest parking spots I know in wellington.

On thinking back about driving this car I actually found it hard to come up with talking points. In some cases you might think that is good there was nothing wrong and you would be right. I found it easy to drive and very little effort was needed to drive it even in slow inner city traffic.

The other side of things does point out that there was also nothing incredibly memorable about driving this hatch, which for me is not the best because I am such a hot-hatch fan – but this is not a hot hatch so it does not need to be aggressive and be able to attack every corner. It needs to be easy to get used to, easy to drive, easy to park and not make it feel like you’re driving a tank.

And the Corolla does all those things. It’s not trying to be fast and flash and lairy it’s performing a function and it performs it well. One thing that I did remember however, was the lack of road noise. It was really quiet inside which is unusual for somewhat entry-level family hatch, especially with New Zealand’s notoriously noisy roads. I have driven cars twice the price of this and they were not as quiet, so it did make for a pleasant driving experience. One other point I would like to talk about is something that has a been a bit of theme in small family cars of late: adding a “Sport” button. To me the engines in these cars are made to be just right, to have the right amount of power to be able to do what you need but also tuned to not be having to use masses amounts of fuel to achieve it. The engines are built for purpose, so I get a little confused when the go and put a sport button in the car.

I will be honest, I kind of forgot the sport button was even there for the first few days but when I did remember it, I tried it out and not a lot happened. The accelerator might have gotten a hair more responsive and the engine held on to lower gears a bit longer but it was not like it changed the dynamics of the car a whole lot. It would be just a ‘feel better’ kind of button, just giving you the satisfaction of having pushed it.

Flip over now to economy, I found over the course of the week that I had it I did a fair bit more of city driving than highway driving. So having the hybrid would have helped here but even at that I probably only used about ⅓ of a tank of fuel. My final score for fuel economy was 7L/100km, which is about what I would expect for my driving when 6L/100km is the advertised number. The Toyota Corolla Hatch SX is a good small hatch that has modern style and technology for a reasonable price. It is super easy to drive and very versatile for a small family. It is lacking a little bit in rear leg room so if your kids get a bit too tall it could be a problem. But with usable boot space and being so nimble and easy to drive the the Corolla SX makes for a good small family hatch. So I think I would have to agree nothing has changed, except everything. 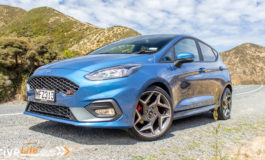