When Holden New Zealand calls you up and says, “hey it’s been a year since the launch of the new Commodore. Do you want to come to Pukekohe racetrack and drive them around?”, there are two answers;

I went with the later, and flew up to Auckland for this event. It was going to be a difficult day, but I’d struggle through it.

First was a catch-up at Holden New Zealand HQ, then it was off in range of five Commodores – all V6 AWD models, except for one four-cylinder. We switched around cars and drivers a few times, taking in the countryside via Clevedon and Hunua – and the Commodores lapped it up.

This V Tourer will soon be on the track…

Corners, undulations, bumps mid-corner – it didn’t seem to faze the big wagon. I had high hopes for these cars on the track.

Once we arrived at Pukekohe racetrack, there were three more V6s, which meant we almost had a car to ourselves for the duration of the track drive – but still switching after three laps in each.

After a short driver’s briefing, we headed out to grab a car each. All were AWD models, which was sure going to help with cornering. I grabbed a VXR, which was adorned with a new, ‘Black Edition’ package. This is a limited edition package, to celebrate one year of the ZB Commodore, and is only available on the RS-V and VXR models. The Black Edition carries no cost – it’s available to the first 40 Commodore buyers starting in April. This Black Edition was revealed at the racetrack, and comes with black stuff, like gloss-black inserts on the grille, window surrounds and front side vents – and a Black Edition badge on the boot. So yes, it’s all cosmetic but it does look good on the car.

I’ve driven the V6 and diesel ZB Commodores so far, so it was a déjà vu moment, getting into the VXR. I checked the odo of the VXR I was in – it had done 83km from brand new. In fact, every Commodore I drove this day had done less than 200km. I guess we were running them in.

Within a minute we were off, following Mike Eady, an advanced driving instructor and race car driver from www.tracktime.co.nz. Heading out to the track and flooring it, the V6 growl kicked in. I dare anyone to say the Commodore V6 doesn’t sound good. Every time I heard that engine growl, I liked it more and more. We did some easy laps first, including taking the cars through a bit of a slalom, and it reminded me how settled the chassis in the ZB Commodore is. Turn-in is excellent, and it handled the cone slalom without any drama. We upped the pace on the next lap, and still the car remained poised and composed, even with heavy braking into the hairpin, it’s hard to unsettle the car.

Back to the pits was next, then a car swap. I jumped into a Calais V Tourer, not exactly a car made for the track, and a surely a long way from the VXR? After I got into the car, someone jumped into the passenger seat – none other than Greg Murphy. So, no pressure at all not to stuff up. Greg was great though, giving me tips on improving my lines and braking, all totally relaxed. I didn’t stuff up, didn’t spin out, so it was all good. My Man Card was still intact.

In the V Tourer, the chassis felt similar to the VXR. It stuck, and booting the hell out of it coming out of a tight bend saw little wheel spin, and plenty of grip.

We did our laps, then switched cars again, as I got into a base model V6 AWD liftback – thankfully Greg got into another car. I wasn’t sure I could handle that pressure again. Like the others, there was very little difference in handling characteristics. There probably were differences, but it felt like it was handling just as well as the other models, even with changes with suspension and tyres/wheels.

Our track time went on like this – laps, then switch cars. Anyone who doesn’t appreciate the ZB Commodore and just how good it is, hasn’t driven one. The chassis is top of the class, that V6 engine is sweet and is happy at the redline, gear after gear (I can testify to this). We worked that 235kW V6 to the redline of 6,800rpm when we could.

Our last run of the day, I was back in the VXR, and then three others – including Greg Murphy, in the back seat – got into it as well. Let’s just say I was hoping hard I wouldn’t do something wrong. Something really wrong, like spin out – or worse. I could just picture the headlines, “Greg Murphy killed on racetrack by rookie driver”.

But no – even four-up, the VXR handled just as well as with me only driving. Performance was down, but barely noticeable. It impressed me greatly, and while my race lines were still needing improvement, I did okay. I did have to brake earlier with the extra weight, but overall it was a competent car on the track with the extra passengers.

Once the track day was over, time to head back to Holden New Zealand, and then the airport. There are those out there that are adamant that this – V6 or four-cylinder –  isn’t a ‘true’ Commodore, and it should have been called something else. Rob Trubiani – Holden’s Technical Integration Engineer – Vehicle Dynamics, Vehicle Development – summed it up beautifully: “I can see both side of the conversation,” he said, “how some people see this as a Commodore, while others do not. I love the passion of the people that say it shouldn’t be called a Commodore. But in the end, it’s Holden’s large sedan, so it’s called a Commodore, no matter where it’s made.”

Holden deserves to sell a lot more Commodores – on the road or on the track, it’s simply a great car.

Footnote: These cars with low kilometres on them, and driven on the track? They are going to be put out as Holden staff cars – not put out to be sold. 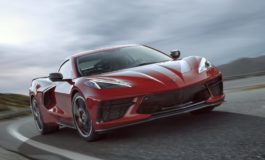