The CX-30 is already available in Europe and has been selling well until recent world events slowed things down. You’ll be pleased to know that all Mazda dealers will be open from April 28th for contactless sales and servicing, and any existing warranties or servicing plans will be extended free of charge for the duration of the shutdown.

The CX-30 is the first car to be based on their new Gen7 platform and size-wise it sits almost exactly halfway between the CX-3 and CX-5. Logically it would be called the CX-4 but that name has already been given to another car in overseas markets, so it became the CX-30.

Mazda told us that their design philosophy is very much human-centric. Where other manufacturers are focusing on autonomous driving systems and self-driving, Mazda are focusing on the driving experience, with their Jinba-Ittai (car and driver as one) philosophy. Their aim with the CX-30 was to make an SUV which drives like a car, and has a fun driving experience. Similarly with the exterior design, they’ve made efforts to make it look more like a small sporty coupe than a boxy SUV, whilst preserving interior space. It should still have good head and leg-room for front and rear passengers, and has a 430 litre boot capacity.

They’ve also made efforts to improve the look, feel and sound of the interior. Given how good recent Mazda interiors have been, it certainly sounds like the CX-30 will be impressively finished. They say that the biggest improvements over previous platforms are in NVH (noise, vibration, harshness), and as Mazda was already one of the best at this, I’m looking forward to driving this car and seeing for myself. They’ve moved speakers from the doors to the A-pillars so there are fewer holes, plugged assembly holes, added extra sound deadening in the floor and roof, even inserted special damping nodes in the bodywork itself. At the same time they’ve also managed to make the body stronger and stiffer than previous platforms.

The media system has their latest firmware, with Android Auto and Apple Carplay included. A Bose upgrade with subwoofer and extra speakers is included in the Limited spec. Standard spec is pretty impressive, with lots of safety features, and smart cruise control as standard across the range.

Mazda designed the seats, body, suspension and tyres as one complementary system, designed to handle well, but also give the best ride comfort. They re-designed bushes, made some components more rigid, even worked with tyre manufacturers to create their own tyre spec with softer side walls, to reduce shocks on the suspension and smooth the ride. Combining this with their G-Vectoring Control “Plus” system should make the handling and comfort of the CX-30 pretty impressive. We’ve praised this system before in other Mazdas, it uses the brakes to make tiny corrections, which improve cornering, handling and stability, and it’s an excellent system. The CX-30 has a newer revision which Mazda says is even better.

The all-wheel drive versions of the CX-30 also have off-road traction assist which automatically sends torque to the wheels that need it, to get you out of a sticky situation. Mazda were careful to point out that this is not an off-roader, but it could get you out of a muddy field, or a slippery boat ramp. The 4WD system has been designed with new lower-friction bearings, allowing thinner diff oil to be used, which means the all-wheel drive models only use 3% more fuel than 2WD. Pretty impressive.

All of this is covered by Mazda’s 5-year warranty, servicing and roadside assistance package.

We’ll be test driving the CX-30 later this year to let you know what it’s like in person, but on paper it certainly sounds like an impressive small SUV. 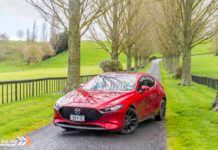