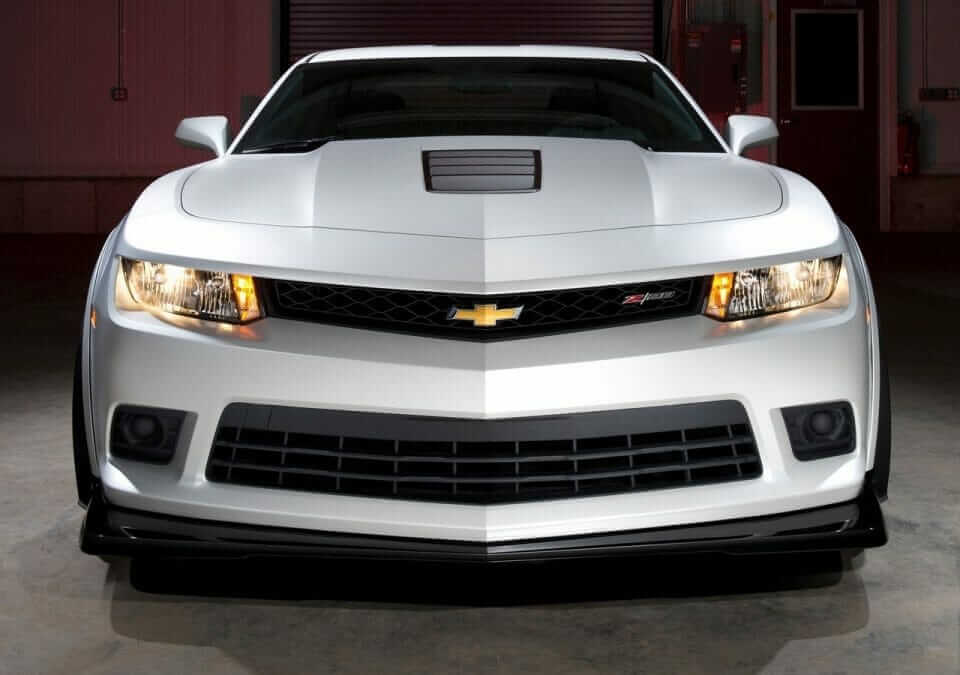 Chevrolet introduced the restyled 2014 Camaro line at the 2013 New York Auto Show, including the return of the Z/28, the most iconic model in Camaro history.

The 2014 Camaro models feature a revised exterior design that integrates high-performance aerodynamics for more efficient cooling and stability at high speeds. The new Chevy Camaro Z/28 also features a full aerodynamics package that creates downforce at speed, which helps make it the most track-capable offering in Camaro’s history.

“As the ultimate track-capable Camaro, this car restores the mission of the original Z/28, and serves as a testament to the expertise of Chevrolet as the best-selling brand of performance cars,” said Mark Reuss, president, GM North America. “The build sheet is the wish list of any racer: lightweight, high-revving, dry-sump LS7 engine; carbon-ceramic brakes; integrated coolers for track use; true aerodynamic downforce, and a significant reduction in curb weight. This car could only come from Chevrolet, and could only be called the Z/28.”

The first Camaro Z/28 was introduced in 1967, created to compete in the Sports Car Club of America’s Trans-Am 2 class. It featured a smaller, lighter, 302-cubic-inch V-8 for improved weight balance, as well as quick-ratio steering and a heavy-duty suspension for track use. In keeping with its road-racing focus, the 1967 Camaro Z/28 was not available with an automatic transmission or air conditioning.

While the new Camaro Z/28 is not intended to compete in a specific race series, it is solely focused on track capability. In initial testing, the Camaro Z/28 is three seconds faster per lap than the Camaro ZL1. That extra speed comes from three areas:

Like the original, the 2014 Chevrolet Camaro Z/28 is offered only with a manual transmission. In a nod to modern convenience, air-conditioning is available, but only as an option.

“We set out to make the fastest road-racing Camaro possible that was still street-legal,” said Al Oppenheiser, Camaro chief engineer. “While the Camaro ZL1 offers exceptional performance on the street, the drag strip, and the track, the Z/28 is entirely focused on the track performance. The Z/28 will be too track-focused for most drivers, but offers road-racers one of the most capable track cars ever offered from an automaker.”

The new 2014 Camaro line will arrive at Chevrolet dealers later in 2013. The Camaro Z/28 is expected to be appearing at track events across the United States in spring 2014. 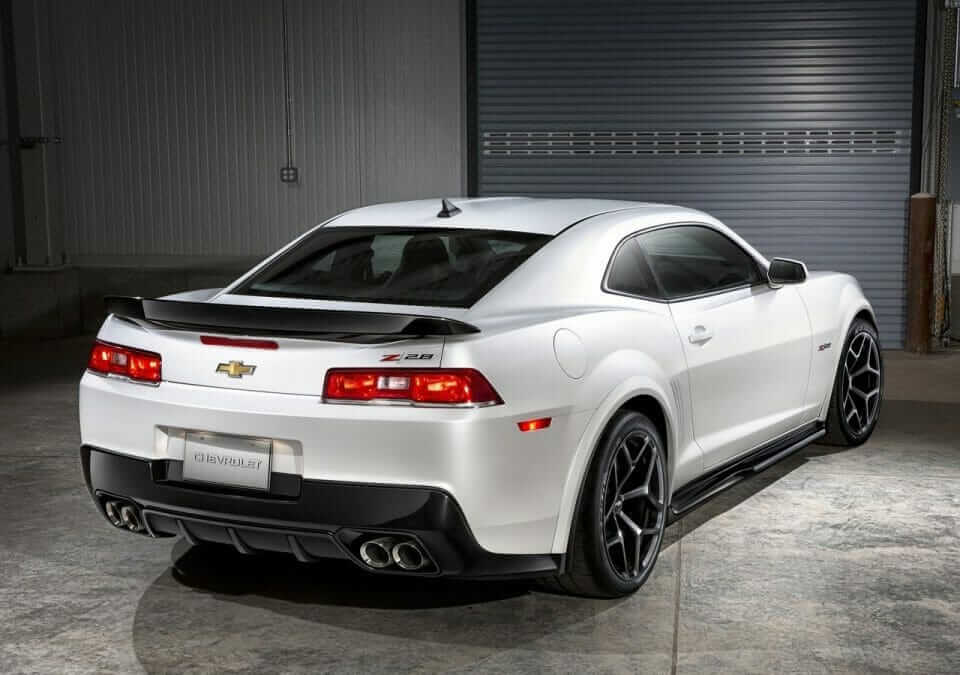 The 2014 Camaro represents the most significant redesign since the introduction of the fifth-generation Camaro as a concept car in 2006.

“The 2014 Camaro is our opportunity to apply what we have learned listening to our customers, and our continuing development of high-performance models,” said Tom Peters, Camaro exterior design director. “We look for solutions that are both functional and beautiful so that the result is genuine Chevrolet – simple, powerful, honest, and more than expected.”

Compared to the previous model, the design represents a strong visual change front and rear, resulting in a wider, lower, more contemporary appearance. The front fascia features a wider lower opening, and a narrower upper opening that also updates the appearance of the iconic “halo ring” HID headlamps on the Camaro RS package. The functional hood vent on the Camaro SS helps reduce heat and aerodynamic lift. Moving to the rear, the sculptural decklid, horizontal lamps and diffuser complete the powerful statement.

On the interior, the Camaro Z/28 features trim in a distinctive, matte-metallic finish named Octane, the ZL1 flat-bottomed steering wheel, and standard Recaro seats with microfiber suede inserts. The new seats (also available on the coupe versions of the SS and ZL1 models), feature aggressive bolsters for high-performance driving, as well as seat cutouts inspired by the five-point harnesses found on racing seats. To save weight, both front seats incorporate manual adjustment.

The rear seats of the Z/28 have also been modified for weight reduction. A total of nine pounds (four kilograms) was saved by eliminating the seat-back pass through, as well as using high-density foam in place of the rigid structure of the seat back and steel mesh of the seat bottom.

“Unlike the Ford Mustang Boss 302, we felt it was important to keep the 2+2 configuration of the Camaro Z/28 as Chevrolet already has a world-class two-seat sports car in the Corvette,” said Oppenheiser. “By modifying the construction of the rear seat, we were able to reduce the overall weight of the Z/28 while still preserving the flexibility of 2+2 seating.” 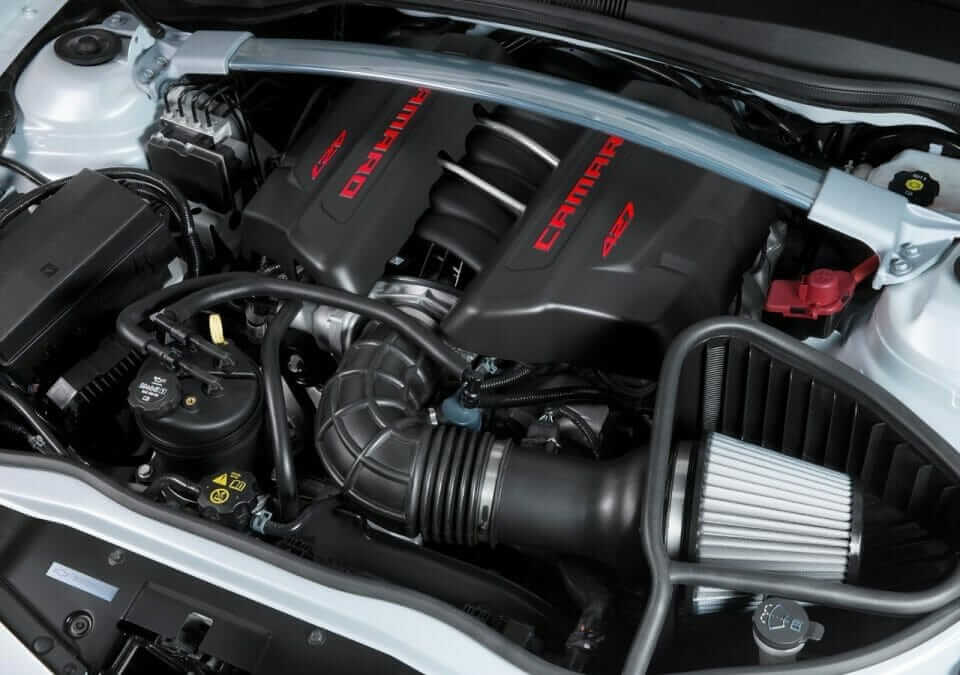 7.0L, LS7 the heart of the Camaro Z/28’s track-capable performance

Like the original, the new Chevrolet Camaro Z/28 forgoes ultimate horsepower and torque for improved weight balance and track performance.

In 1967, the most-powerful engine available in a factory Camaro was a 396 cid V-8 with 375 horsepower. To prepare the Camaro Z/28 for road racing, engineers specified a lighter, 302 cid V-8, officially rated at 290 horsepower. While the 302 was not the choice for drag racers, it proved ideal for sports-car racing.

Today, the most-powerful engine offered is the Camaro ZL1’s supercharged 6.2L LSA, which delivers 580 horsepower. The heart of the 2014 Camaro Z/28 is the lighter, naturally aspirated 7.0L LS7 first introduced in the Corvette Z06.

“The LS7 is ideal for road racing because it delivers amazing performance in a compact, lightweight package,” said Jordan Lee, Small Block chief engineer and program manager. “The broad torque curve and high redline of the LS7 mean fewer shifts are required for each lap, while the lightweight design improves the front-to-rear weight balance for better handling.”

Co-developed with Corvette Racing, the hand-assembled 7.0L (427 cid) V-8 uses a number of high-performance components, including:

The standard dual mode exhaust system and larger-diameter pipes enable improved air flow. By bypassing the mufflers during acceleration, the system increases both the torque and sound generated by the LS7 engine.

The Camaro Z/28 is exclusively offered with a Tremec TR6060 manual transmission. The six-speed features close-ratio gearing and 3.91:1 final drive ratio, both optimized for the power characteristics of the LS7.

Power is distributed to the rear wheels via a limited-slip differential featuring a helical gear set, rather than traditional clutch packs. The new design enables the driver to apply more power and get through corners faster, by continuously adjusting the torque bias to maximize available traction.

The differential works in unison with Chevrolet’s proprietary Performance Traction Management system, which allows drivers to adjust the level of throttle and brake intervention to match their capability and driving environment.

Unlike some competitors’ “track package” offerings, the Camaro Z/28 makes standard all the cooling systems required for track use. This includes the dry-sump oiling system for the LS7, which is connected to an integral liquid-to-liquid cooling system for engine oil. 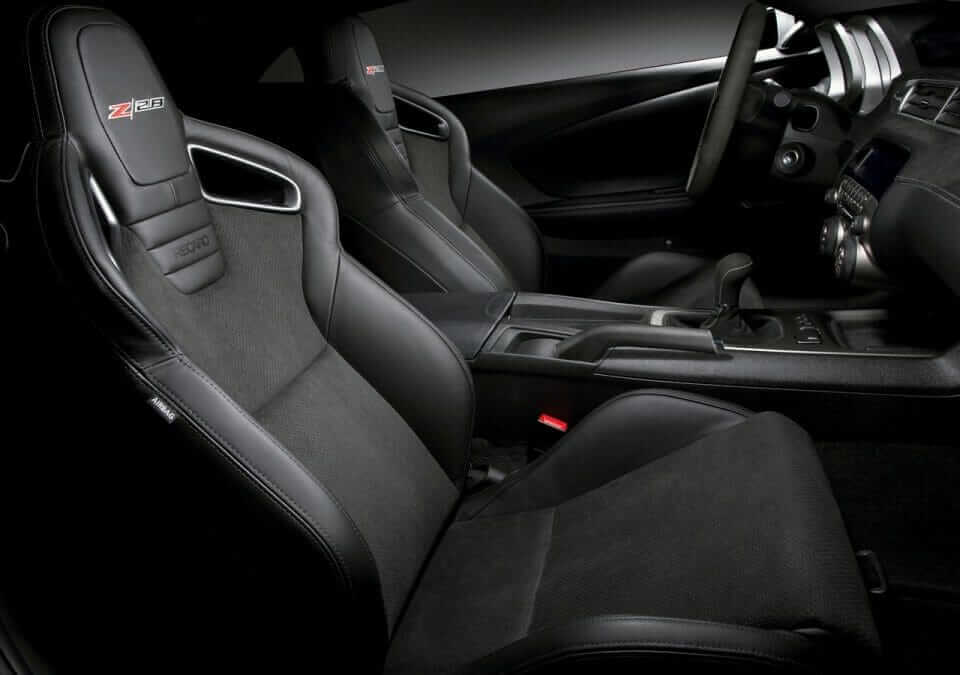 The singular focus of the Camaro Z/28 is most evident in the chassis, where the most has been made of every component for track use, from the ultra-high performance tires to race-proven dampers.

“We used the very best components in the industry to deliver uncompromised performance, lap after lap,” said Mark Stielow, Camaro Z/28 engineering manager. “We made nearly 200 changes to improve the track performance, which cumulatively make the Z/28 capable of 1.05 g in cornering. For perspective, with all other things, equal increasing maximum grip from 1 to 1.05 g can cut up to four seconds per lap.”

The Camaro Z/28 is the one of the first production cars fitted with race-proven, spool-valve dampers. Compared to a conventional damper that offers only two-way tuning for bump and rebound, a spool-valve damper allows four-way adjustment to precisely tune both bump and rebound settings for high-speed and low-speed wheel motions. The wider tuning range allowed engineers to dramatically increase the damper stiffness on the Camaro Z/28 without a significant change in ride quality. Additional chassis changes include stiffer string rates and suspension bushings for improved cornering response.

The Chevrolet Camaro Z/28 features 19-inch diameter wheels and tires, which reduce unsprung weight by 42 pounds (19 kilograms) per car compared to the 20-inch wheels standard on Camaro SS and ZL1. In addition, the smaller diameter wheels lower the center of gravity by 33 millimeters, further improving handling.

At all four corners, the lightweight, forged aluminum wheels are wrapped in massive 305/30ZR19 tires. This is the first production application of ultra-high performance Pirelli PZero Trofeo R tires, and believed to be the widest front tire on any production car.

The combination of tire grip and braking power enable the Camaro Z/28 to achieve up to 1.5 g in deceleration. With standard front brake cooling ducts, the Z/28 is also capable of continuous track use unmatched brake feel, lap after lap.

“What makes the Z/28 so addictive is it inspires confidence through every section on the track,” said Stielow. “The incredible, balanced performance helps you carry much more speed through every corner: the brakes are so good you can adjust your braking points later and later; the grip and suspension damping allows you to carry more speed through the apex; and then the limited slip allows you to make the most of the LS7 as you power out of the corner.” 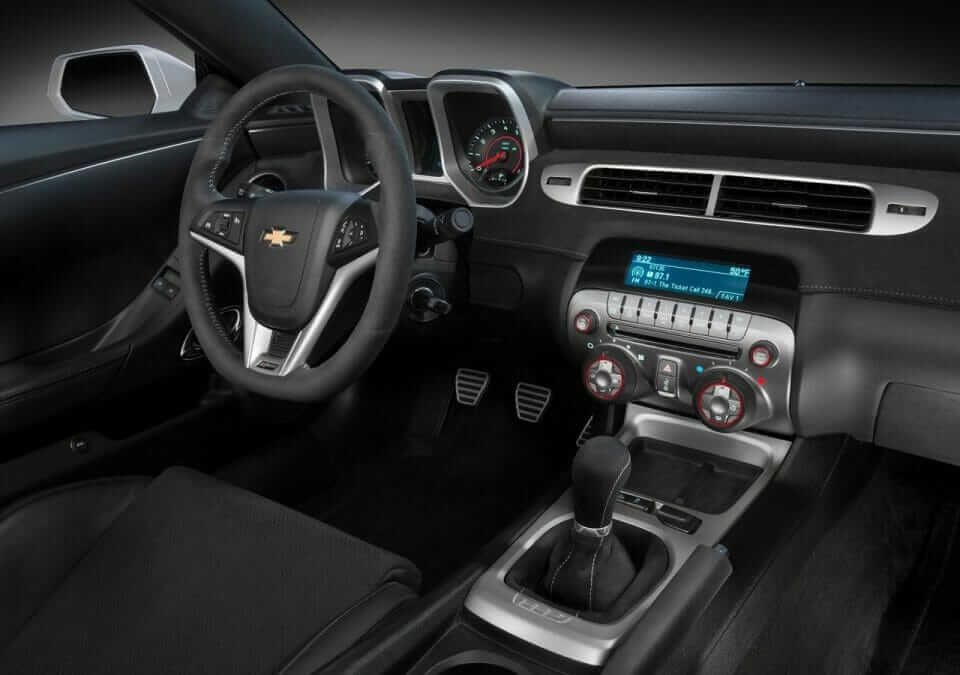 To optimize the track performance of the Camaro Z/28, the engineering team subjected it to an intensive lightweighting program, saving 100 pounds (45 kilograms) compared to the naturally aspirated Camaro SS and 300 pounds (136 kilograms) to the supercharged Camaro ZL1.

“We looked at every subsystem for opportunities to save weight,” said Oppenheiser. “Our goal was to get rid of everything that didn’t make the car faster, and keep only what was required by law. For example, we wanted to eliminate the audio system completely, but we had to keep a single speaker for the seat-belt chime to meet safety requirements.”

Other examples of weight savings include:

“The team was so fanatical about saving weight, we even stripped the unused wiring out of the harness when we eliminated the fog lights, speakers, and air conditioning,” said Oppenheiser. “Every ounce saved contributed to making this the most track-capable Camaro we have ever built, and a worthy successor to the Z/28 name.” 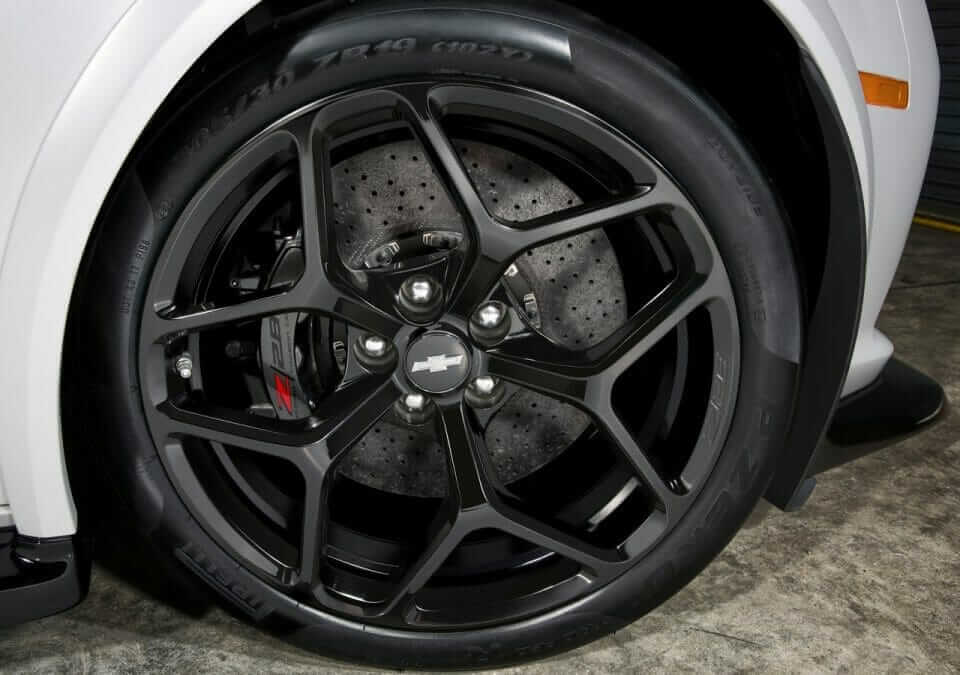