A certain disgraced TV presenter said that with cars there’s no such thing as cheap and cheerful. The Suzuki Celerio is one of the cheapest new cars available in New Zealand. So do we agree with the tall denim-clad one?

The Celerio is built in Thailand, and to a tight budget. A walk around the car is all you need to be able to see where cost savings have been made. The inner wheel arches, boot floor and engine bay aren’t painted in the main body colour, just primer and clearcoat. Interior plastics are hard, but quite thin, so they flex when you push them.

But take a step back and what you see is a small five door, four-seater city car. It’s quite tall and narrow but has a couple of slashes moulded into the bodywork to break up the side profile. The  little 14-inch alloy wheels, body coloured bumpers, door handles and mirrors help to give it a smart appearance and avoid that “base model” look. 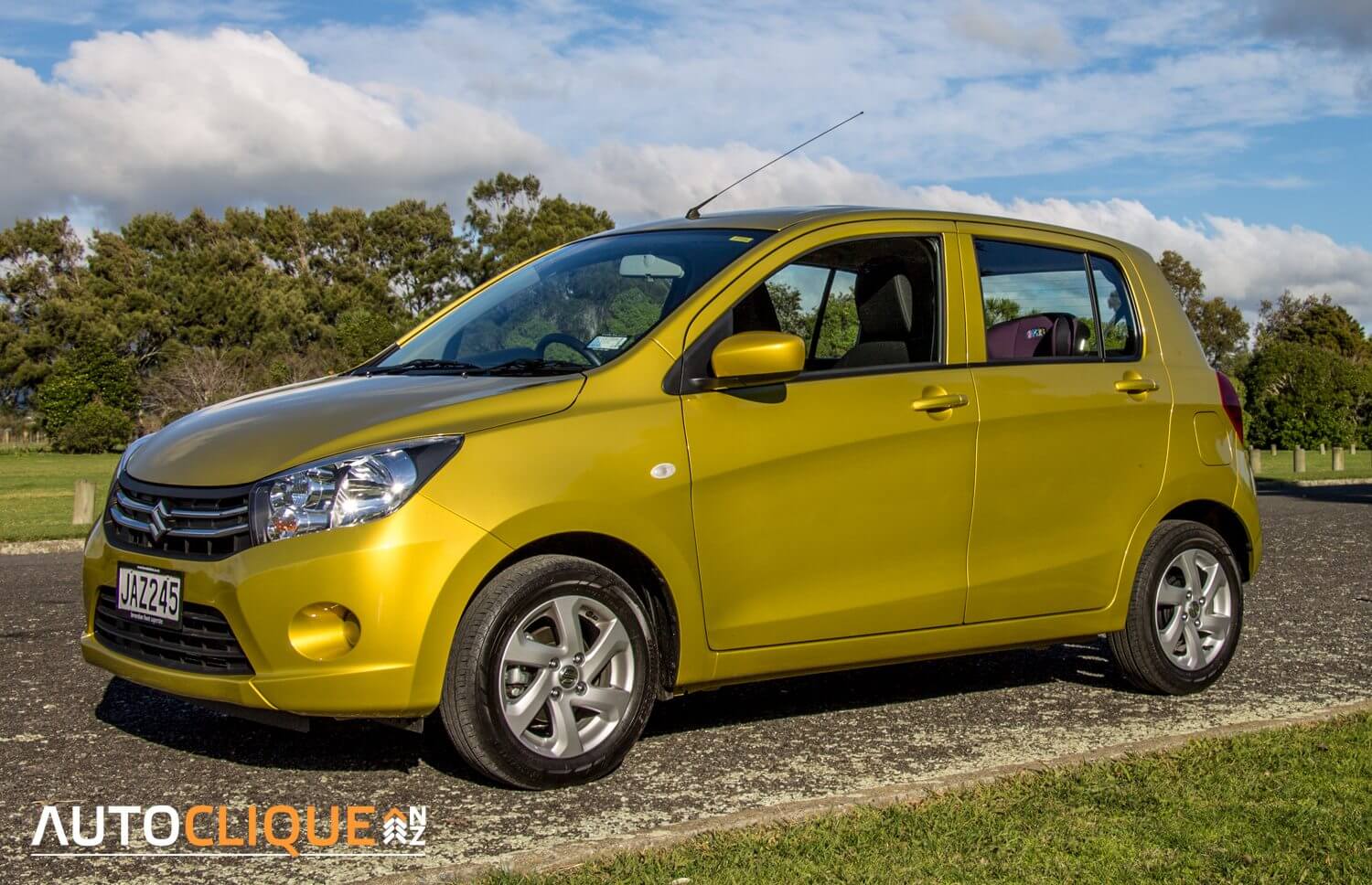 Our test car came in a colour called Sunshine Yellow Pearl. Not a colour I would have picked, but at least it wasn’t Raspberry Pink! It’s also available in grey, white or a pearl blue.

The cloth seats, complete with funky dot pattern to match the yellow paint, are comfortable. The driver’s seat adjusts in all the usual directions including height, and the steering wheel adjusts for height so the driving position was easy to get right. The steering wheel is quite thin and made of hard plastic; a bit better material would have been nice, but it does the job. The gear knob is spherical with a rubberised surface, which is quite pleasant to use. Instruments are clear and simple. There is a big central speedo, rev counter dial and a digital display for the trip counter, time, fuel usage and range. Start the engine – with the key in the ignition, no start buttons here – and the little 3-pot idles quietly. The 998cc engine makes 50kW and 90Nm, but the Celerio has that nippy small car feel.  It helps that the engine note has a nice little growl when accelerating and I think this makes it feel faster than its published 14.6s 0-100 time.

The suspension is fairly soft with some body roll on corners, but the ride is good on city streets. The clutch and power steering are light and make parking and stop-start driving easy. The gear lever has quite a long-throw and feels a bit vague. I never had a problem finding the right gear but it did have a rubbery feel to it.

The dash and bonnet slope away from the driver, making the windscreen tall and giving excellent forward visibility. The C-pillars are quite thick and can sometimes get in the way when reversing. All of the essentials are there. Standard kit includes four electric windows, electrically adjustable mirrors, a four speaker stereo with USB, Bluetooth, phone integration and CD player, 12 volt power socket, and air conditioning. There are cup holders front and rear, a decent sized glovebox, bottle holders in the doors and a spacesaver spare wheel. In the back are 60/40 split folding seat backs, ISOfix child seat mounts and tethers on the seat backs.

The Celerio has a 4 star ANCAP safety rating and all of the usual safety systems – ABS, ESP, EBD and brake assist. There are six airbags – front, side and curtain. The first test for the Celerio was to pop over to Placemakers to collect some kitchen units I had on order. With the seat backs folded it easily swallowed a flat packed set of drawers, wine rack and a 2.3m long toe kick board. What was more impressive was that it didn’t struggle up Wellington’s Ngauranga Gorge with two adults and about 40kg of cargo on board. Test passed! Commuting to and from work was a breeze with the light clutch, and the sound quality from the stereo was a lot better than I expected. Phone integration worked well and call quality was good.

When the weekend came, we needed to head up the coast to Levin, so we installed my daughter’s car seat and set off. I was surprised at how well the Celerio drove on the motorway. It got up to 100kph with no drama and was quiet when cruising. The suspension soaked up the bumps well and even on the dodgiest bit of highway I know (near Queen Elizabeth Park), the ride was nice and smooth. I thought the little engine might struggle on some of the hills but it coped well, rarely even needing a change down from 5th gear. We arrived in Levin feeling surprisingly relaxed. For a short while the centre of the dashboard developed a bit of a rattle, which raises the question of how the car would cope once it had a few thousand kilometers on the clock, but it has a three year warranty to cover any issues.

The boot is a good-sized 254 litres with seats up, which comfortably fit our week’s shopping. Rear legroom is excellent for such a small car and the rear doors open wide enough that even I with my size elevens could get in and out easily. The seating position and suspension are also quite high off the ground, making the car easy to jump in and out of. Dare I suggest that these things plus the car’s size and light controls would make it ideal for the older driver? Over the days I had the Celerio I covered about 300km with a combination of stop-start rush hour traffic, town driving and a longer trip and the combined fuel usage was 4.76l per 100km. Pretty close to Suzuki’s published figure, and giving a range of over 700km from its 35 litre fuel tank. At current prices that means you could drive from Wellington to Auckland for about 70 bucks. And I would do it in this car, despite its size.

So back to the original question – is there such a thing as cheap and cheerful? I think so, and Suzuki have done a really good job of it with the Celerio. The Celerio is obviously built to a budget, but it has all of the essentials and a decent safety rating. The 3-cylinder engine has a bit of character and the car is fun to drive and also copes well on a longer journey. For basic, entry-level motoring with a three year warranty it’s a great choice.