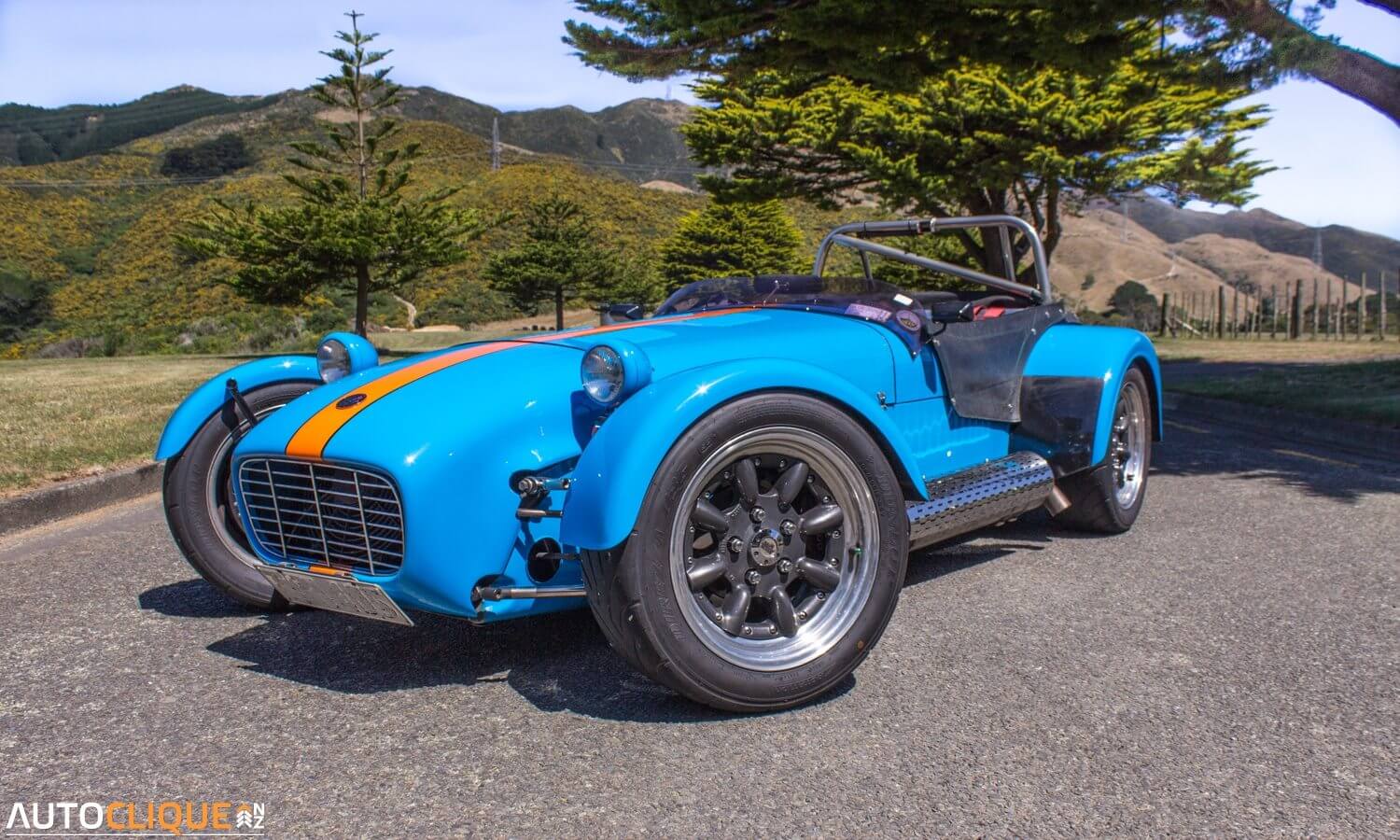 Graeme Wong is a man who loves cars, and more importantly for Autoclique, loves driving them. He has a 1998 Subaru  22B replica rally car with a closed deck block, forged internals and a sequential gearbox, that he takes regularly on the Targa rally.

He also owns a 1972 Porsche 911 – outwardly a 2.7RS but with a 2.8 RSR engine that is slightly detuned to allow it to be driveable on a public road and on lower octane fuel. This is a period car (magnesium case, twin plug, mechanical fuel injection) that was admitted to the 40th  Year celebration of 911RS in Germany in 2012.  The car raced at the Nurburgring in 1973 and carries a plaque commemorating the race.

Graeme also owns a 1997 Fraser Clubman and it was this car I was most interested in. The Fraser is a Lotus 7 replica (I was going to say ‘knock-off’ but that just seemed rude) that are made in Auckland to whatever specification you want. The Fraser Cars Limited started in 1988 and is still going strong, although under different owners now. It’s your classic, “what engine do you want in it?” type of company – working with the owners to customise their ride. A beautiful Wellington day was perfect to check out this car. On looking at Graeme’s car, the fit and finish of is excellent. You can see he’s spent lots of time and money on it, but the underlying quality is still evident.

Graeme didn’t buy his Fraser new, but an interesting story went along with its purchase, as sometimes seems to happen.

“I’d been sort of liking and wanting a Lotus 7/Caterham/whatever and thought I’d like to own one, one day,” Graeme said. “I bumped into a friend in Auckland who had just bought a Fraser and did a bit of racing with it. This got me fired up and I decided to go to the Fraser factory for a look. I saw Neil Fraser and he told me to take his demo car for a ride. Most Fraser Clubmans have a 4-cylinder engines but the demo car had a 2.5 litre V6, it was a beast.” Graeme asked about pricing from Neil, and found it was all totally dependent on what shocks you wanted (inboard or outboard), what engine, what build stage etc. He didn’t buy one then, but later on he got a call in 2003 when he was home in Wellington, from Neil Fraser.

“Neil said a local guy had one in his garage – his son owned it, and had gone overseas. The car was up on blocks and hadn’t been started for a while. The Dad was sick of it, so I emailed his son – but he didn’t want to sell it.”

A few months later Graeme got a call from said son who was back in town, and wanting to sell the car.

“I asked him how much,” Graeme continues, “and he gave me a figure. He wasn’t open to offers. I told him to get the car running and legal first so I could get it checked out by Team European, and we’d talk.” The son did get the car going, and it checked out fine, so Graeme paid the asking figure.

“At that time I had a 996 GT3 as my road car. After a while of fiddling around with it and tuning the Fraser, I realised I wasn’t driving the GT3 on the track anymore as the Fraser was more fun, so I sold the GT3, and bought a rally car instead [the Subaru].”

Graeme’s Fraser is powered by a 2-litre 3SGE Toyota engine, and has a Toyota T50 gearbox, which is about at the limit for power output of the engine. His car did have two twin-throat Webers, but now has Jenvey electronic fuel injection with individual throttle bodies for more power. “I noticed a big difference, it was a lot quicker from 6000-to redline. It just keeps going from 6000rpm. I also got the cam ground to exactly the specs I wanted – basically I was asked how high I wanted to rev it, I didn’t want it to hit 8,000rpm. I wanted some longevity, so called a number of 7600rpm.” At the moment the engine is putting out 240HP at 7600rpm.

His car has inboard discs at the rear, with the fronts now sporting bigger Wilwood rotors and 4-pot calipers. There have been over 300 Fraser Clubmans built, and I can see why – this car just oozes character, and certainly brings out the racer in you.

Neil Fraser sold the company to a younger couple (Scott and Ida Tristram) who still own the company.

To buy a new Fraser Clubman, the prices start at $60K, depending on specs and finish.

Time for a ride! I squished my body into the passenger’s seat; not a lot of leg room and if you have wider hips or a ‘fuller’ body, you simply ain’t gonna fit. Graeme started the car. Nice. That lovely snap-crackle-pop sound of a highly tuned 4-pot Toyota 3SGE engine. I had preconceptions that it would be like riding in a go-kart on the road. Yup! Totally was like that. You felt the bumps and sat low…so low. But it all added to the experience. A quick trip around the suburbs and then it was off to a road to test the handling out, with Graeme at the wheel. Funnily enough, he lives only minutes from my Favourite Handling Road and went straight there, without me even suggesting it.

Flat – that was the handling. Zero body roll at all, and let’s be honest, there’s not much of a body to roll anyway. But still flat as a pancake and the grip was excellent too, as you would expect. Graeme showed obvious skills from driving numerous Targa rallies, and threw the Fraser around with deft skill.

I was loving the experience – sounds, smells, performance. It was like being on a motorbike in some ways. With the windscreen all of 4 inches tall and leaning over at an angle, you pretty much are in a four-wheel motorbike. For a while there I wondered what the burning smell was, until I discovered my leg was resting on the transmission tunnel too long. With the excitement of the car, I didn’t feel a thing. But my leg was cooking. There’s no insulation of any sort to stop the heat, and even the handbrake (which is on the passenger’s side) was untouchable.

Who cares?! A great blast and something to remember.

Then Graeme pulled over and dread settled into my stomach: “Want to drive?” he said. I did, but was worried about having to hand in my Man Card if I stuffed it all up.

I turned to him and said, “I’ll stall it.” Luckily his response was simply, “you can just start it again.” The raw experience I got from the passenger’s seat was repeated, but this time I was in control.

The gearbox was a delight – very short throws, just little snicks between gears. It really needed double-clutching on the downshift, but I always do this anyway so all good. I did have to take my shoes off as there wasn’t enough room in the pedal box for my right foot to fit without it hitting the brake if I tried to put my foot on the gas pedal. Not a lot of room down there!

You can certainly feeling everything – the instant performance, fantastic brakes, light weight, incredibly flat handling. My thoughts of a road-legal go-kart were confirmed.

The unassisted brakes were pretty impressive – those four-pot calipers on big discs and only 600kg mean no power assistance is really necessary, and the feel from the brakes was excellent. The steering too, unassisted of course, was superb; nicely direct and every bump in the road was sent through, but not harshly – just enough feedback to make it a true driving experience.

I had to sample the snap-crackle-pop a little bit – what a sound!

As we approached Graeme’s driveway, I picked the wrong one and overshot it slightly, on the uphill. Uh-oh, this means another hill start. Since the hand brake is on the left side of the car and was still too hot to touch it was going to be the hill start where I either redeemed myself, or lost face yet again. Redemption! A nice clean hill start with zero bunny hopping. Huge thanks to Graeme Wong for sharing his ride with me. A day to remember and I have the photos to prove it.

* Graeme’s Fraser was painted by Paul Biggs at Heretaunga Collision Repair Centre, Upper Hutt. The engine was built by Al MacLennan Macbilt Engineering, Grenada with camshafts and other input from Lynn Rogers Automotive.

Want to share your ride with the DriveLife Team? Send us an email!

For more info on the Fraser Clubman, check out their website:  www.fraser.co.nz