I tested the range-topping Kia Optima Limited last year and I was really impressed with its quality and features, especially for the price. My only real criticism was that the 2.4l engine was a bit old-school and a smaller turbo engine might be better. Well it appears Kia listened to my sage advice, so here we have the new Optima GT with a 2.0l turbo engine.

There are three trim levels in the Optima range – the EX starting at $45,790, Limited at $48,990 and the GT at $53,990. The first two have a 138kW/241Nm 2.4l four-cylinder engine, while the GT has a 2.0l GDI turbo making 180kW and 350Nm. All are front-wheel drive with a 6-speed auto transmission. All have ABS, ESC, brake assist, electronic parking brake, front, side and curtain airbags, front and rear parking sensors, tyre pressure monitoring, blind spot detection, lane change assist; it‘s a long list. The Limited also gets a panoramic glass roof as standard.

Over the Limited, the GT gets slightly better fuel economy (8.5 rather than 8.3l/100km) and some extra toys including flat-bottomed steering wheel, sharper steering, LED dynamic bending headlights, premium leather with red stitching, a new 18” wheel design and re-styled front and rear bumpers. I’ve always liked the looks of the Optima. It’s not an exciting car to look at, more understated and smart. A bit like the look certain premium manufacturers go for. I like the new bumpers, especially the rear with the built-in diffuser. They’ve done a good job on the front bumper of integrating the panel for the radar cruise so it’s not too obvious at a glance. The whole car is a bit sportier than the Limited without going over-the-top. The new GT’s 18” wheels suit it well and show off the red-painted calipers. Overall I think it’s a handsome car that I’d be happy to live with. Inside, Kia have done a great job of giving the Optima a premium feel. The materials are all good quality with soft-touch plastics where you need them and metal trim pieces to highlight the dark dash. The new GT seats look great with their ridged centres and deep side bolsters. I like the GT logos and red stitching on the edges and steering wheel which help to make the interior feel a little more sporty. The seats are comfortable, with good side support, and they’re electrically adjustable in the front – 10 way with memory for the driver and 8 way for the passenger. They have three-stage heating, and ventilation for hot summer days – an unusual feature at this price point.

The back seats are also comfortable and have a lot of leg room. Seriously, it’s like a limo back there! Rear passengers get their own aircon vent and a couple of power sockets, and pull-up sun blinds built into the doors – another rare feature. The back seats are the best place to enjoy the panoramic glass roof. This is a feature I love and it’s done well in the Optima. The front half can pop up or slide open, and when closed you have the option of leaving the glass exposed or a full-length blind. I did find the controls a bit fiddly and once opened the roof in the rain instead of just opening the blind like I intended.

The flat-bottomed leather trimmed steering wheel is adjustable for height and reach and has thumb controls for stereo, phone and cruise control. It’s nicely shaped and feels good in your hands. The instruments are lit in soft white white and are clear and easy to read, with a large rev counter and speedo and a 4.3” information display in the centre. I mostly kept the centre display set to digital speedo, but it can show fuel consumption and trip info, lane departure info, media info, trip directions, and the setup menu where you can set lots of the car’s functions like how long lights stay on after locking, welcome function, startup jingly music, etc. The boot seems huge – 510 litres to be precise and it’s very long. There’s a full-sized spare wheel underneath too. The rear seats split 60/40 and fold down to get longer items in. There’s a cool auto-open feature where if the car is locked and you stand by the boot for a few seconds it pops open. Great if you’re carrying lots of stuff.

The central 8” touch-screen set into the dash controls the media system and shows the reversing camera display. The camera has moving lines when you turn the wheels to show where you’re going – a feature that is absent in a lot of cars’ reversing systems. There are sensors front and rear too which can be turned on with a centre console button if required.

The stereo itself is excellent. It’s a 590 watt Harman/Kardon system with 12 channel amplifier and ten speakers. The sound quality is very good, and it’s loud!

There’s a good-sized cubby under the heater controls where the aux and USB inputs are. This has an inductive phone charger and a spring-loaded sliding cover so you can leave your phone out of sight if you want to. Last time I drove an Optima it rained the whole time, and it looked like it would be the same again this time. If you’re driving the Optima GT in the rain you have to be pretty careful with the throttle. With 180kW going through the front wheels and maximum torque from 1400rpm it’s easy to wheelspin, and the traction control allows a fair bit of spin before calming it down.

But before I talk about the drive there’s something I need to mention. The Optima GT has a sound generator. Yep, like an M3. Push the start button on the Optima GT and there’s a deep, throaty rumble. Not too loud, but very noticeable. It’s almost like a Subaru engine note. Stick your head out of the window and there’s not much sound at all. Lots of people hate the idea of a sound generator because it’s “fake”, and at first I was inclined to think the same, but the more I drove the GT, the more I got to like the sound. It doesn’t sound synthetic. It’s not too loud, but it gives the car a much more sporty feel without annoying other people with an antisocially loud exhaust. Best of both worlds. And if you decide you really hate it, your Kia dealer will be happy to disable it for you by removing a cover in the engine bay and pulling out a plug.

My first impression when driving the Optima on a motorway was that it’s smooth. The damping is very good indeed, and it’s pretty quiet too. Road noise is still apparent, more so than say a Subaru Levorg, but it’s not intrusive at all. In fact the ride was so good that my daughter and wife kept falling asleep on longer trips. When you’re cruising along at 100kph there’s no discernible engine noise.

The cruise control is radar guided and can come to a complete stop and set off again in traffic. Following distance can be adjusted, and speed is displayed on the info display and is easily set with the up-down jog controls. I found it often braked harder and later than I would have, making it less smooth than it could have been, but overall it worked really well. Off the highway you can have a bit of fun with the GT. In fact it can be a little unruly at times if you push it, especially in Sport mode. That’s not to say it’s a handful but the way the power and torque are delivered mean it feels pretty fast. Sometimes it reminded me of the tuned turbo car I used to have, with power coming in a surge, even resulting in an occasional bit of torque steer. This sort of thing makes me smile and certainly gives the car character. Sport mode also makes the sound generator a bit louder, encouraging you to accelerate to hear that growl. Conversely in Eco mode the generator is more muted.

The steering on the GT has been improved from the Limited with the motor being mounted on the rack rather than steering column. Kia say this provides better feel and quicker, more linear response. It certainly feels good – very direct and precise with just the right amount of weight to it.

They’ve recalibrated the six-speed automatic transmission to work better with the new engine, and they’ve done a good job. Gears can be shifted manually if you prefer using paddles behind the steering wheel or by pushing the shifter to one side then pushing backwards or forwards. There are still a few mid-sized sedans around despite the SUV explosion but engine types and specs vary a lot in this price range. The Optima GT is a car that I would be happy to live with every day. It’s a good size, has plenty of safety and comfort equipment, it’s comfortable but handles well. It’s fast enough to have some fun but quiet when cruising. It has a real premium feel to it and compares well to cars costing significantly more. And it comes with a five year warranty.

The only thing stopping me giving it the full five chevrons is the way it handles in the wet. I actually liked that it needed to be treated with a bit of respect to get the best out of it, but I imagine the average buyer of a car like this would be less of an enthusiast than me. So 4.5 chevrons it is. 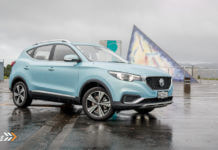 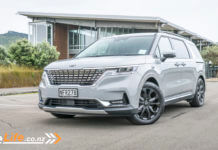