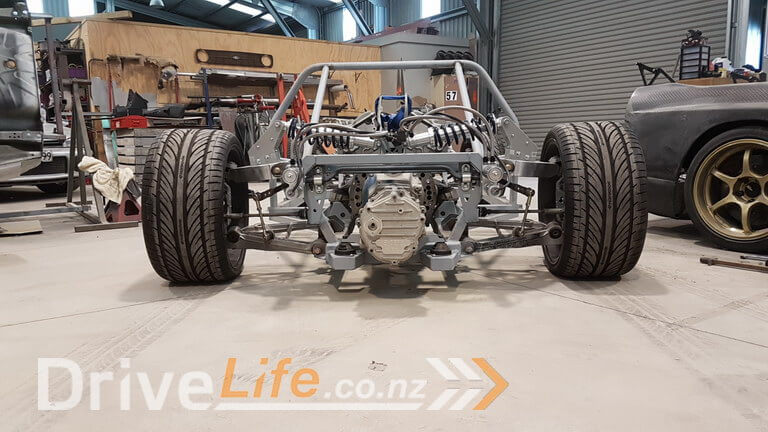 OK OK, so it’s not the 58th version of the rear suspension I have made, but it certainly feels like it sometimes!

So, in the last episode you might remember that I was very happy with what had been months of thinking, sourcing and making the rear suspension for our project, however what I hadn’t done yet was to fully test the new system.   Unfortunately there were some issues with clearance between the main pushrod that is attached to the lower suspension arm and the upper suspension arm.   Now this issue only happened on what is called “full compression” and “full droop”, basically the two extremes of the suspension travel.  If I’m honest I don’t believe that in normal operation there would ever have been any issues at all, but I am particularly fussy and didn’t see the point in making a car from scratch that is meant to be everything you want and then compromising on something like this that may or may not end up being an issue, or at worst potentially dangerous……………so………… it’s back to the drawing board!

After many hours of wracking my brain I came up with a concept that I later found out that is also something that Pagani and Koenigsegg have used so I was super happy that my brain was working properly this time around! The design basically does away with the pushrod and rocker system and requires the manufacture of new top suspension arms that also include a point for the suspension strut to mount directly to.   Follow the pictures below and it will make more sense.

First we needed to start with a slab of 7000 series aluminium.  This is extremely hard and strong compared to normal aluminium so provides steel like strength but with less weight. After some machining time on a CNC mill we ended up with this. Getting the shape of the arms roughed out helped me to be able to test fit them onto the chassis and check alignment, spacing and other general dimensions to make sure we weren’t going to waste what was expensive material and even more expensive CNC milling time if things weren’t perfect. Next I needed to move some of the support bars that run up to the back of the main roll hoop.   These bars were going to be in the way so I was able to move them forward slightly to make space, but still provide the support they need.   The picture below shows a basic diagram in green of where the bar used to run. In the original design, I had secured the suspension struts to the rear of the chassis due to the angles that the rocker arms ran, however with this new design the struts needed to run more horizontally opposed so I needed to weld in a new support bar and also get some plates to weld either side for the struts to bolt into. The next part was to create a support block that would in turn have plates bolted to it. These plates would allow me to bolt the struts directly to the new arms.   Some people are probably asking “Why not just make it all one piece ?” Well, the answer is, lots of different reasons.  The first is cost.  To purchase a block of 7075 aluminium that large (height) would be in the region of $ 2000-3000 per side! Not to mention that the amount of machining would triple or quadruple over the simpler design.   Secondly, having a design such as this allows us to easily change the design of the plate as we develop the car. If the motion ratio or mounting position changes, this can be easily and cheaply done by simply laser cutting some new plates.  Thirdly, I honestly did think of this design on my own and then started looking around to see if it was a silly idea and found that Pagani and Koenigsegg used this system so if it’s good enough for them it’s good enough for me!

The idea that I came up with here was to machine a recess into the new arm, then create a mounting block that would fit down inside the recess.   This creates a more “mechanical” binding since the block can’t twist or move in any direction because it’s locked in by the recess. As I write this I’m feeling pretty proud of myself to be honest. I’m no engineer or designer, but I feel like I really thought this part through. One of the largest considerations with every little part that I make for this project is safety and also the LVVTA (Low Volume Vehicle Technical Association) certifier who is going to have to approve every little part of the car before it’s officially allowed on the road.

Since the suspension is directly attached to this part, and also the fact that mounting block and mounting plates are separate parts means that method of fixing and safety aspect of this part is probably as important as any part on the car. If anything came loose or came off it would most likely mean a catastrophic crash.  That said (this is why I’m so proud), I designed about 4 versions of these mounting blocks to integrate “locking” mechanisms into the design to make sure there are failsafes upon failsafes……. harder than it sounds whilst also making it simple. 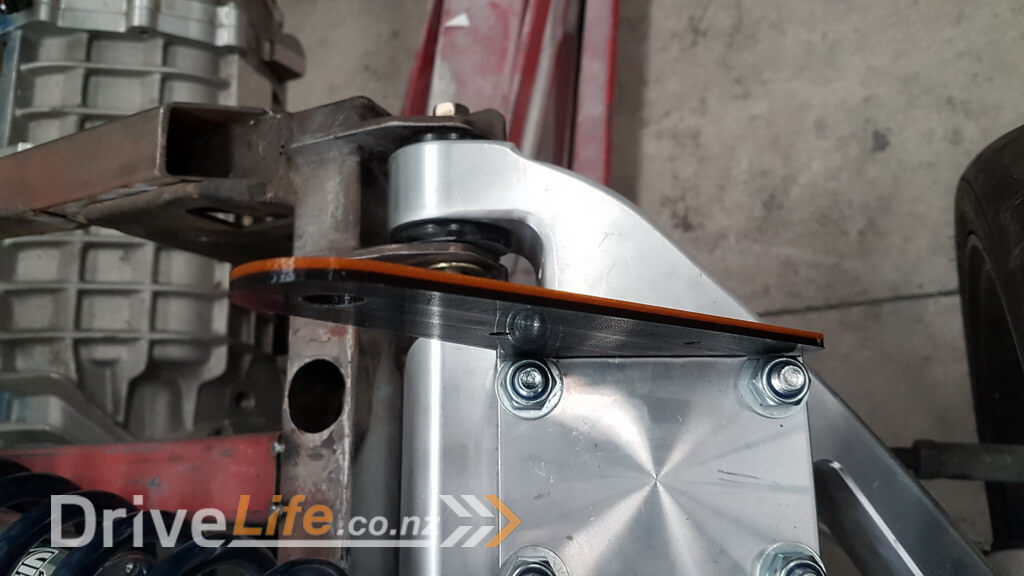 It looks a bit rough, but I needed to mock up some plates to get an idea of somewhere to start so I tack welded some steel together to get a rough idea of somewhere to start and then created a better design in 3d printed material.   I created a few examples before settling on this design and so the 3d printer has been invaluable for this type of operation before getting the real plates laser cut. The end result of this redesign looks like this.  There are some other support struts and bolts that go between the plates that aren’t shown here (you can see the holes in the plates) but essentially this is how the final design looks.