Mazda, unlike its other domestic counterparts in Japan, have held onto the internal combustion engine tightly. They’re fixated on trying to make petrol and diesel engines as efficient as they can be without the need for electrical assistance. The SkyActiv ethos is just this; designing the drivetrain and the rest of the car to work as efficiently with each other as possible.

It’s something I respect Mazda a lot for doing, but recently they’ve introduced their first hybrid vehicle in Japan, the Axela (Mazda3) Hybrid. They’ve also joined up with Toyota to co-develop electric vehicles in the future so Mazda’s current internal combustion engine (ICE) only lineup may soon be no more. So for the meantime I wanted to see if their most economical and smallest offering, the Mazda2 SkyActivD (known in Japan as the Demio) is something Mazda New Zealand should consider selling locally. I know looks are a subjective matter, but how can you deny the little Mazda2 isn’t a good looking car? I’d go as far as to say it’s the best looking car in this category. Mazda have been hitting their designs out of the park lately and the 2 is a great example of that. 2017 saw some minor tweaks to the design but like the old saying goes, ‘why fix it if it ain’t broke?’

It’s a shame the Machine Grey Metallic colour isn’t available in New Zealand because I think it adds some sharpness and sportiness to the design. Perhaps it’s the fact this is the same colour used to launch the MX-5 RF that makes it seem more special. It somehow manages to pull off looking sporty and cute at the same time, without looking either overly macho or girly. 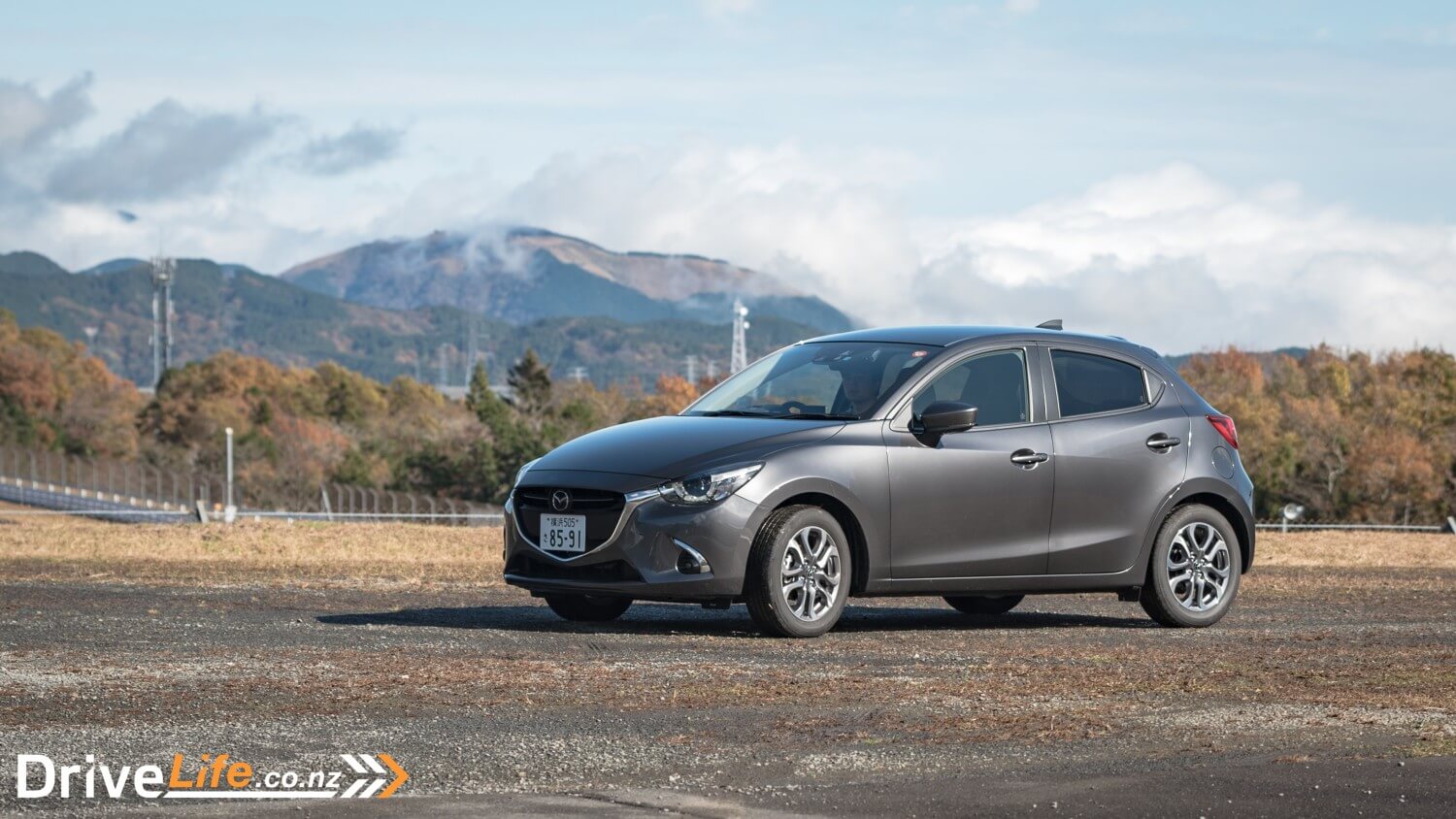 If you’ve been inside a modern Mazda recently, the 2’s interior will feel familiar. I liked the clean and modern design of the interior, it looked like it had actually been styled whereas some other cars in this class have interiors that just look like interiors. Inside the 2 was all very minimalist with the only dedicated controls on the centre console for the climate control and MZD Connect infotainment system. 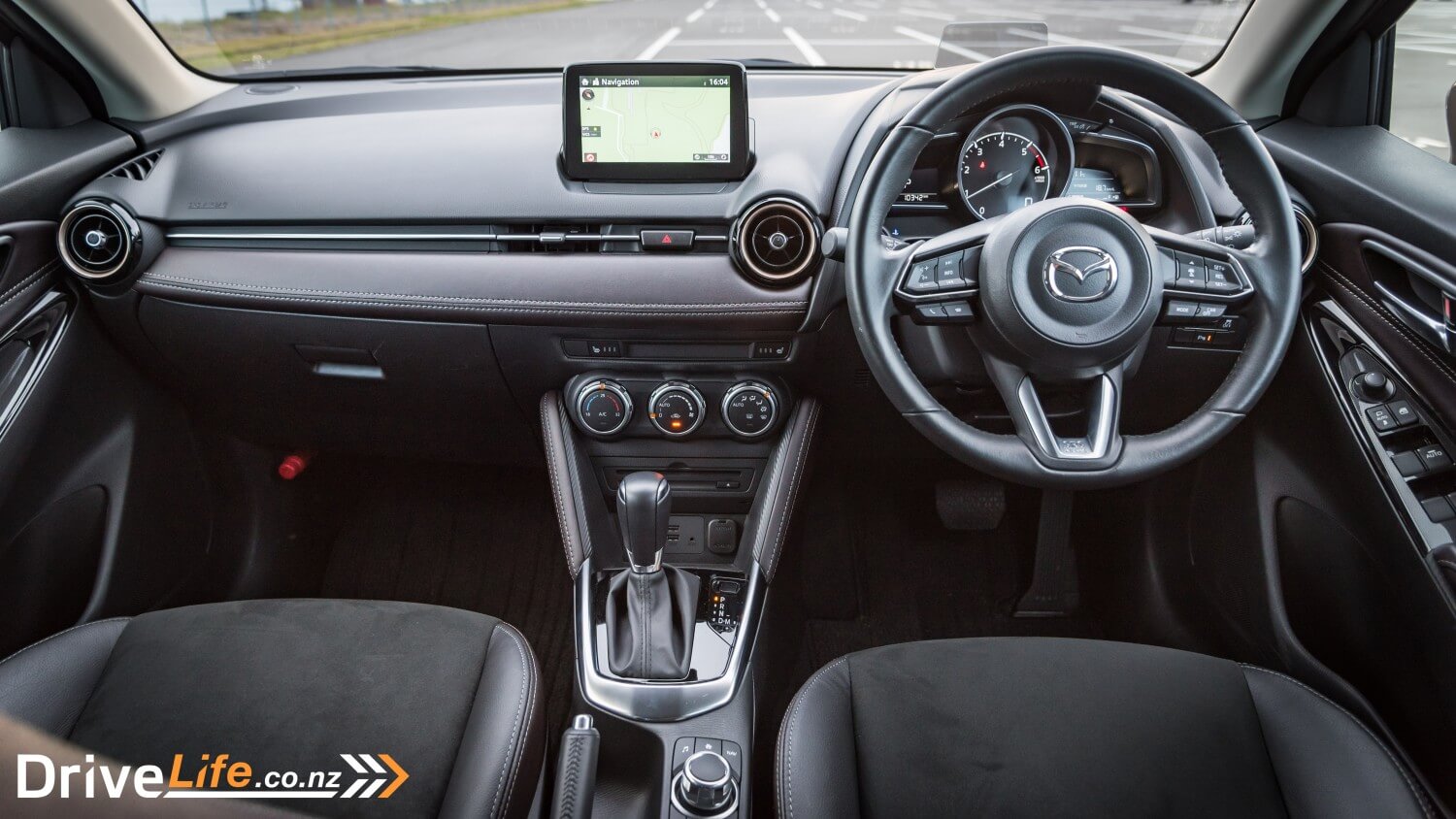 It’s the same infotainment system used in the Mazda range, from the touchscreen to the rotary dial and menu buttons. There’s not much need to go too depth with this as it’s been covered in previous reviews of Mazdas but it’s one of the better and intuitive factory systems on the market.

Being able to operate it with both the rotary dial (while in motion) and via touchscreen (while stationary) is a stroke of genius. The screen itself is crisp and clear, meaning the reversing camera is rather good too. For some reason there’s quite a lot of connectivity for your phone. There are two USB ports, an AUX port, and a 12V socket. Of course, most people will probably just hook up their phones with bluetooth but options are always nice. 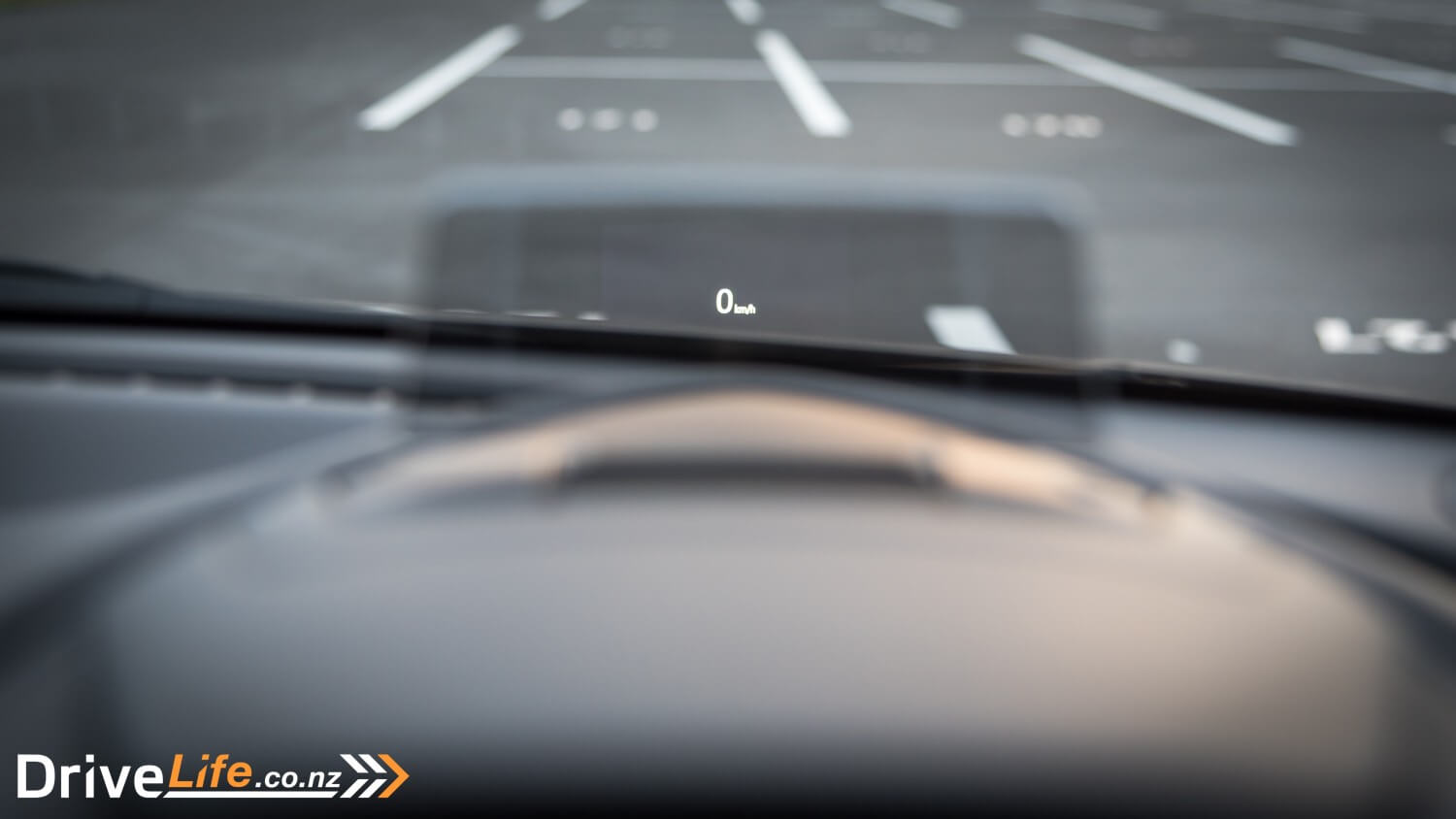 There’s no escaping the fact you’re in Mazda’s smallest and most affordable offering. There are some hard plastics here and there but the things you see and touch such as the steering wheel, gearshift, and seats are covered in leather. In the case of our test car, rather lovely plum coloured leather. I have to admit, the leather inserts on the dash and doors did give it a somewhat premium feel but the heads-up display – sorry, Active Driving Display – really sealed the deal for me. This displays your current speed and satnav directions.

The seats themselves were comfy and offered decent lateral support. There are few things I truly despise and seats that don’t hold you in place around corners are one of them. Luckily, the seats in the 2 kept me in an upright positions whilst going around most corners. Unfortunately, the 2 didn’t come with a central armrest which made longer journeys a bit tiring. On the plus side, it has heated seats. It’s getting ito winter here now and the seat warmers were utilised frequently. Passengers in the back had to make do with cold bums as only the driver’s and front passenger seats were heated. People in the back didn’t have as much legroom compared to say, a Honda Jazz. It was also quite dark there as the window line went up for ‘design’. The middle passenger would also have to deal with a rather intrusive hump on the floor.

The boot was a decent size at 280L but falling short compared to more lacklustre-styled rivals. Hey, those good looks come at a price but life isn’t always about practicality. If you want more space, the rear seats do split 60/40 and this expands the boot to 960L. It’s not all bad though, despite the rising rear window overall visibility wasn’t bad. Though, having blind sport monitoring did give this an edge over cars that don’t. I’ve become rather fond of this technology and genuinely think it’s something all new cars should come with. Lane departure warning however, I can live without.

Mazda’s current slogan ‘Be A Driver’ isn’t just some clever marketing nonsense, it reflects with their current lineup. Their cars always drive a bit more spiritedly than rivals. Perhaps it’s due to the lack of resources at Mazda and it’s the same engineers working on all cars. So the guys responsible for the MX-5 also had a hand in fine tuning the hatches, sedans, and SUVs. The 2 has a promising chassis with great grip and balance. Push it hard into a corner, harder than most people buying these sorts of cars would, and the front doesn’t wander off into a faraway hedge but rather goes in the direction you’re pointing it – despite having a diesel lump out front. In the real world, it felt more engaging than say a Toyota Yaris. That said, the ride was a bit on the firmer side. Certainly not as soft as others in this category.

It was pretty agile too with light but accurate steering. Other rivals have vague and light setups to make them easier to use, the 2’s steering actually felt like it was connected to the wheels. The agility is due to the low weight. This diesel version tips the scales at 1130kg, which is pretty impressive. I’m not going to say it’s a hot hatch but certainly with a more powerful engine it has potential. The 1.5-litre four-cylinder turbocharged diesel engine isn’t exactly the most exciting engine in the world. However, it does the job well. With 77kW and 205NM of torque available from 1500rpm, it felt gutsy enough for real world driving conditions.

Around town the low-end torque came into its own pulling away from the seemingly never ending red lights in Tokyo. There’s some noticeable shake and vibrations inside. It doesn’t sound too loud, but while it doesn’t sound agricultural outside there’s no escaping that diesel grumble. It wasn’t particularly noisy at idle either, thanks to the i-stop stop/start system. If you don’t like having your engine cut off at the lights, the tiny diesel engine does make its choice of fuel known. However, for some reason when it would cut the engine off it would do so quite violently. Then when it came back to life, you could feel the whole car shake back awake.

The 6-speed auto was a standout feature. All of its Japanese rivals have CVTs, and while yes CVTs have come a long way since their inception, I still loathe them and the horrid droning noise they produce. The auto in the 2 is something other Japanese manufactures should aspire to have with smooth shifts. It felt like this gearbox was designed to suit this engine, because it was.

On the open road the diesel engine showed off its fuel economy trump card. Around town it wasn’t much more economical than a petrol hatch, or maybe I was just too heavy with my right foot. But on a long distance motorway drive the 2 was closer to its claimed average fuel consumption than a petrol or hybrid car. Now whether or not a diesel engine in a car this small would be received well in New Zealand is another thing. Currently no manufacturer in this category of hatchbacks sells a small diesel. These sorts of cars are popular in Europe, though for how much longer is another story. But if Mazda were to offer this car in New Zealand, it’d be in a niche of its own. There are benefits, the long distance range and lower cost of diesel for example.

That said, I have tried the petrol powered Mazda2 and the 1.5 SkyActiv-G engine suited it well, if not better than the diesel. It was a gutsy engine and the 81kW and 141NM felt adequate, so maybe Kiwi buyers aren’t missing out too much on the diesel version.

The Mazda2 is a great little package offering a bit of style and flair in an otherwise unexciting segment. Most of the cars here are the sort of things you’d buy out of necessity rather than desire. With the 2, it’s a car you can grow to like. A lot. There’s some character there and the cheeky looks are matched with a somewhat cheeky driving experience. The diesel engine may be torquey and economical, but best left suited for longer journeys. There might be a small market for a car like this with a diesel engine in New Zealand but for the most part the petrol engine version would be the ones to get. I’m sure my colleagues will be able to give a proper road test of one on local roads soon.