When the Dodge Challenger Hellcat was launched 2015, there were audible gasps around the world. 707 horse-power in a mass-produced, road-going muscle car – any car – was astonishing at the time. It still is.

Sure, there are other cars now with more horsepower. Dodge released essentially what is a drag car in 2017, the Demon, with 808 horsepower. Chevy tuner Hennessy sent a right-hook when they released the Exorcist version of the Camaro, with 1,000 horsepower. Game on.

The Hellcat isn’t a car commonly seen in New Zealand. With that much horsepower, it almost seems a waste to have one here. But that doesn’t stop people importing them.

One such person is Ange Boland, from Masterton. Her Go Mango-coloured Hellcat is becoming a familiar sight in the country town.

There’s a question I’ve got to ask Ange: why the Hellcat, and not the 6.4-litre SRT model, or even the standard R/T Challenger with its 375hp Hemi V8?

“I always wanted to get a hot rod,” says Ange, “but I really liked the new Camaro shape – and I did take one for a test drive. The thing is a lot of people have got them and seem quite common here now. In the end my mechanic simply said, ‘get a Hemi’ and I was sold on a Challenger. I started looking at the R/T model, then thought why not just go straight to the SRT, with its 485 horsepower. In the end, I thought if I’m gonna get one might as well go the whole hog. I did look at the other models but thought, I could go up one from the R/T to the SRT, and then thought why not just buy a Hellcat and be done with it.” She decided not to go to the US herself and buy one, but got Bryce Williams from Westcoast Classic Imports (Ttauranga) to source the car for her.

“I thought it would take at least a couple of weeks for Bryce to find one – especially since I only wanted it in the Go Mango colour. It only took a couple of days! He had a few to look at, but a couple of them were no go. Then this one came up, and had only done 1100 miles in a year.”

How did she feel, spending so much money on a car she had never seen?

“It’s a lot of money to spend on buy a car sight unseen, but I had total trust in my buyer. He was recommended by a few friends.”

So why tell her buyer to only look at one in Go Mango?

“If you going to get a car like this you want a colour that stands out. I did look at the Lime Green Challengers, but my name is part of ‘orange’, so Go Mango it was.” Ange’s Hellcat is an automatic, by choice.

“I would have loved to have a manual, but with this car and its reputation, I thought that an automatic would be better.” Wise choice.

Of course, importing the car meant she have to drive it back from Tauranga, where it landed and went through compliance.

“I flew to Tauranga, then drove it to Auckland and overnighted, then drove it back from there. No issues on that drive. I was pretty apprehensive, it has a reputation for being an insane car with so much power, so I took it pretty carefully on the drive down.”

And reputation is what Dodge sells the Hellcat with. It can dispense with 100km/h in 3.6 seconds, and a quarter miles goes past in 11.7 seconds. Still, for many buyers of a Hellcat, the first thing they want to do is make it go even faster.

“If I was 20 I’d be dead by now, with 707 horsepower. There’s no mods on my ‘cat, it doesn’t need anything. I’m quite happy with it the way it is. It’s a performance car so has all the performance mods it needs already.”

Ange is also the secretary of Ram Rodders Association in Masterton. She’s not done many runs since it’s been winter, but did go on the recent Tui Brewery run. She’s is taking it to the Cruise Martinborough event in late January – and as part of will be taking it on the drag strip in Masterton.

“I want to take it on the strip just once, so it’s a controlled environment but I can use full throttle. With a car like that…anything could happen on the open road so I’d rather take it to the strip. I am a bit of an adrenalin junkie!”

Now she has the Hellcat, other cars to buy? Is she tempted to add more cars to the collection?

“I’ve always wanted a classic hot rod like a Willys or something like that, but these days I like a few mod cons like heated and cooled seats. I love my heated steering wheel. I guess I’m getting a bit older but I want something easily driveable.”

And drive she does. Now the Hellcat has now covered over 6000ks.

Without being sexist – or at least, trying not to come across as sexist, I asked her about reactions – after all, she’s a female driving a high-performance muscle car.

“All the time, people do a double-take. Sometimes it’s the car and the colour, then they see me. I went back to the Hellcat once from a supermarket and an elderly couple were looking at it. As I approached and unlocked it, they looked at me and he said ‘oh it’s yours?’” So with the performance and value of her Hellcat, did she have any insurance issues?

“The insurance company I went with wanted to put a 5K cap on mileage, I just said ‘no’ and they agreed. There’s no way I want to be limited in how many miles I do. I love driving the Hellcat.”

So if you are near the Wairarapa and get past by an orange Hellcat with a sticker on it that says ‘you’ve just been passed by a girl’, you will know it’s Ange. It’s likely by the time you’ve remembered her name, she’s already in the distance.

* Many thanks to the team at Masterton Motorplex for the use of the drag strip for these photos. 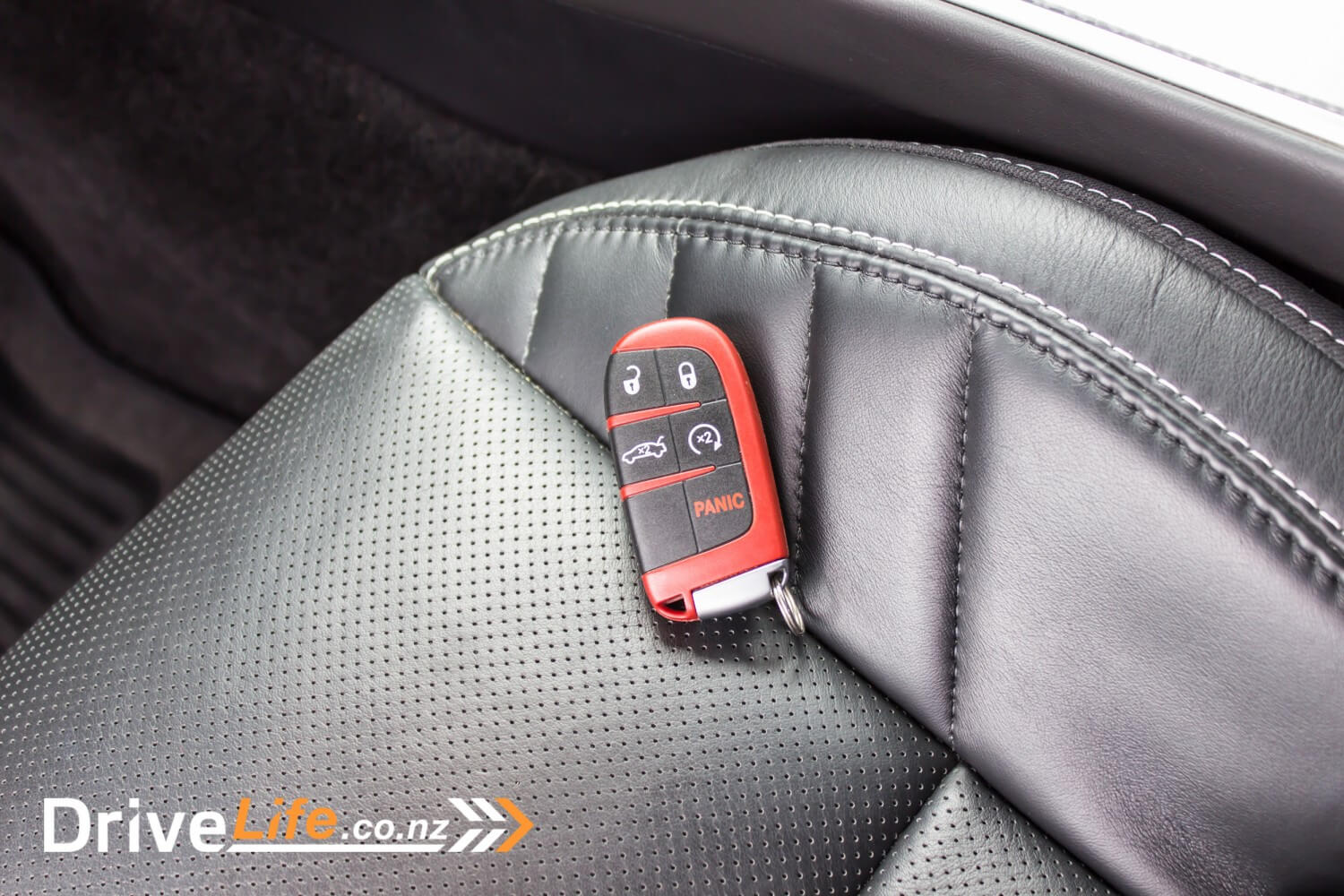