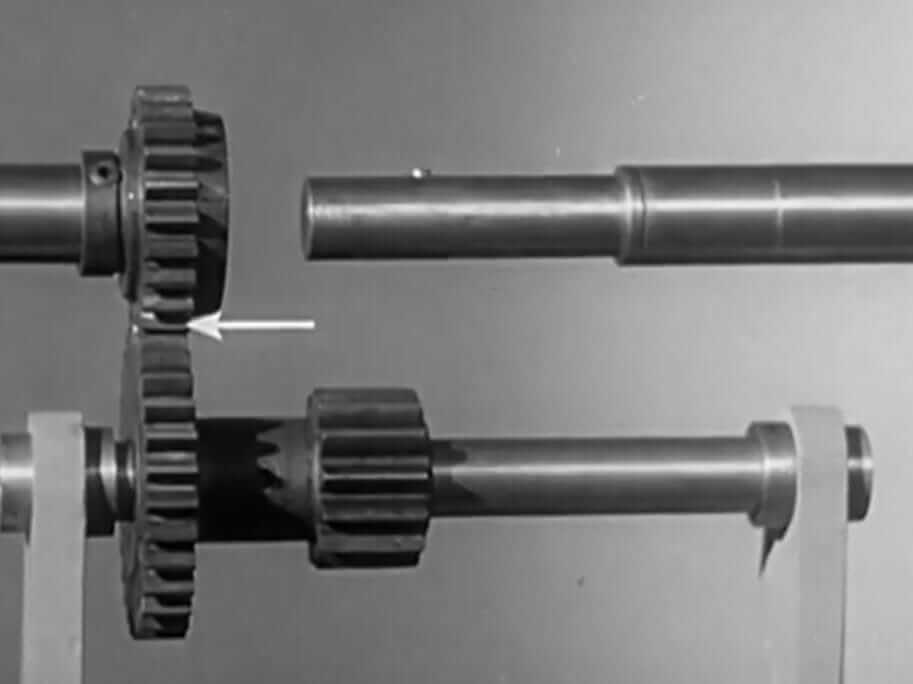 ‘”The transmission in the modern motorcar — the mechanism that makes it possible to have three forward speeds and a reverse — is a series of levers, levers that spin.”

CU disembodied hands using antique can opener to open a can of peaches; CU can open cutting through top of can.
Two boys playing on a seesaw.

VS man demonstrates basics of the lever using triangular piece as fulcrum and a long metal piece, man attaches 10 lbs. weight to one end of the bar and a 5 lbs. weight to the other end; man hangs various weights from both ends of the bar balancing the two by moving the fulcrum to various points along the bar; man demonstrates how a gear is constructed through numerous interlocking levers.

VS stop-motion animation of two wheels with paddles added one by one turning wheels into paddle wheels and then into interlocking gears; cuts to more sophisticated gear; cuts to metal gears; VS CU different types of machine gears, worm gears, bevel gears, lopsided gears.

CU disembodied hand in white glove shifts clutch of car; CU motor shifting gears; CU tire with Chevrolet hubcap begins to move; 1920s and 1930s cars stopped at traffic light begin to move; CU inside car woman shifts gears; car driving down tree-lined highway in possibly New York, what appears to be the Statue of Liberty is seen off in the distance.

Public domain film from the Library of Congress Prelinger Archive, slightly cropped to remove uneven edges, with the aspect ratio corrected, and mild video noise reduction applied.
The soundtrack was also processed with volume normalization, noise reduction, clipping reduction, and equalization (the resulting sound, though not perfect, is far less noisy than the original).

A machine consists of a power source and a power transmission system, which provides controlled application of the power. Merriam-Webster defines transmission as: an assembly of parts including the speed-changing gears and the propeller shaft by which the power is transmitted from an engine to a live axle. Often transmission refers simply to the gearbox that uses gears and gear trains to provide speed and torque conversions from a rotating power source to another device…

– a simple but rugged sliding-mesh or unsynchronized / non-synchronous system, where straight-cut spur gear sets are spinning freely, and must be synchronized by the operator matching engine revs to road speed, to avoid noisy and damaging “gear clash”,

– and the now common constant-mesh gearboxes which can include non-synchronised, or synchronized / synchromesh systems, where typically diagonal cut helical (or sometimes either straight-cut, or double-helical) gear sets are constantly “meshed” together, and a dog clutch is used for changing gears. On synchromesh boxes, friction cones or “synchro-rings” are used in addition to the dog clutch to closely match the rotational speeds of the two sides of the (declutched) transmission before making a full mechanical engagement.